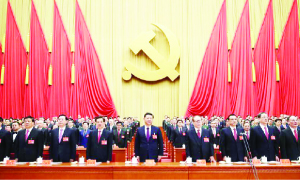 By JACK MWEWA –
THE just ended 19th Congress of the Communist Party of China (CPC) redefined the association as an extraordinary political party if compared to many other parties around the world.
While many other political parties’ conventions are a nightmare, the CPC national Congress is an amusement that reflects the party’s achievements and projects course for the next tenure.
This year Congress held over a period of 10 days at The Great Hall of the People in Beijing, China was a summary research of 59 organisations commissioned by the Party Central Committee on 21 key topics from 16 provinces, autonomous regions and municipalities.
Contrasting African political party conventions that end up in more divisions that unity, the CPC emerges up more organised with new leadership smoothly ushered in.
CPC General Secretary Xi Jinping who is also State President was later seen parading his six member team that was mandated to govern both the Party and State for the next five years.
When most machete and stone- armed African political party cadres are tools of destroying opposing rivals, delegates to this Congress were as peaceful and orderly as church congregants.
This behavior can be attributed to methods of admitting cadres who are selected on factors that include youthful age, education, profession, competent, integrity and must win public respect.
Mr Xi who was reelected recently, like other six top leadership are of sound university doctorate education and joined the Party at a tender age rising from grassroots to become China’s firth President.
As if to affirm the Party’s credibility Mr Xi said the CPC will raise intellectual and moral standards; “When people have ideals, their country will be strong and have a bright future.
We will help our people raise their political awareness and moral standards, foster appreciation of fine culture and enhance social etiquette and civility.”
He also called on Party members to work hard, live simply, and guard against arrogance and impetuosity.
Tianpei Zhang who is a researcher at the People’s Daily media house said party cadres are scrutinized from the community they live before they could be admitted as members.
She said that it calls for one to be dedicated to the ideals of the CPC for them to be accepted and that CPC rates discipline highly such that morality is key.
Dr Tianpei said; “Apart from being morally upright, one need to be committed to understanding and believing communism as exposed by the party.”
Some analysts have said that it is more difficult to join the CPC than seeking formal employment, the former too sets prequalifying examinations before joining.
Not long ago, a provincial Party official was expelled after he was spotted in night club, no amount of pleading he later put up could change the decision made.
Founded in the 1920 by Mao Zedong who is fondly referred to as Chairman Mao, CPC has grown to become the largest political party in the world with 90 million members.
It is Chairman Mao’s charge he gave to the cadres decades ago that they be disciplined, have strong links with the masses and never seek personal gains that echo in their minds today.
Mao called CPC for humility among party membership such that salutations like SIR, MADAM or Excellence are not heard of in China to this day, not even any public infrastructure is named after an individual.
You find infrastructure simply named as People’s, as in The Great Wall of the People, The Great Hall of the People, The People’s Court, The People’s Daily and others. 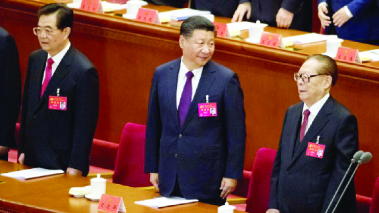 Although CPC was born from the ideal of Russian Communist Party known as Bolshevik, it has strictly implemented democratic centralism among members.
Xie Chuntao, a professor of the Central Party School of the CPC had this to say at one of the interactions with foreign journalists; “The CPC had established democratic centralism as one of its organisational principles and systems in the early formation stages.”
Prof Xie said; “The first programme adopted at the first CPC national congress did not use the term ‘democratic centralism’ but in a proposal submitted by Chen Duxiu for discussion, a similar term was used.
The first CPC Congress recognised the Soviet management system which was an organisational form reflecting democratic centralism.
He further noted that the Political Bureau of the CPC Central Committee revised the constitution on June 1, 1927 making clear that democratic centralism was the Party’s guiding principle, it was first time the Party put forward the concept.
Attendance to the Congress is such a privilege that only a few long standing members with exemplary bahaviour have been lucky to attend one in their life time as many desire to make the cut.
From the initial 2280 delegates that were supposed to attend the 19th Congress five of them had to dropped at the last minute after being found wanting and later disqualified.
Only a political party with such a pedigree can produce quality national leadership that has grown China to heights of development in all spheres that the world is now admiring.
The Congress was also open to the world media numbering 1818 who covered the event from inception to the last day.
“I want to thank you friends from the media who have come to cover us, while I appreciate your reports that have put this Congress on international platform, feel free to report as you see things without necessarily praising us, we will accept criticism too,” said Mr Xi.
“Opening the Congress to the world media is like opening your bedroom to the public and simply saying you have nothing to hide, but everything to share with everyone,” this author said when asked by a local journalist.
This gesture by CPC to international media is in total contrast to African parties that would not allow journalists attend their conventions otherwise they risk being harassed.
Like other political parties, CPC convenes such congresses to review their performance, replenish leadership and occasionally amend their constitution in line with the changing times.
It was at this year’s Congress where Mr Xi’s thought on socialism with Chinese characteristics in addition to Marxism-Leninism Mao Zedong thought and Deng Xiaoping theory was adopted to guide the party.
Mr Xi’s ideal, therefore was enshrined in the Party Constitution, a move that makes him earn a status of heroism after Chairman Mao.
“The Congress unanimously agrees that Xi Jinping’s thought on socialism with Chinese characteristics for a new era, in addition to Marxism-Leninism, Mao Zedong thought, Deng Xiaoping theory shall constitute the guides to action of the Party Constitution,” reads the resolution in part.
In his last five years reign, Mr Xi has rapidly transformed China into a prosperous national heading to becoming world’s best economy, most transparent and highly developed.
Never in the history of this world has a national vigorously fought corruption in the manner Mr Xi has tackled it rounding up corrupt individuals from high ranking CPC officials to ordinary citizens.
Phrases like ‘Catching both Flies and Tigers, to mean that high profile corrupt individuals and low profiles will not be spared, why the ‘Sky Net’ phrase refers to corrupt individual who fled China but now are being fished out brought home to stand trial.
Mr Xi once declared that; “We should continue to catch ‘tigers’ as well as ‘flies’ when dealing with cases of leading officials in violation of Party discipline and state laws as well as misconduct and corruption problems that directly affect people’s livelihood.”
An extract from his report at the Congress reads;”The people resent corruption most, and corruption is the greatest threat our Party faces.
We must have the resolve and tenacity to persevere in the never-ending fight against corruption. Only by intensifying efforts to address both the symptoms and root causes of corruption by making sure officials are honest, clean and with integrity.”
Judging Xi from his past performance coupled with the Party’s history, the world should expect a wholly stronger China in the next five years.