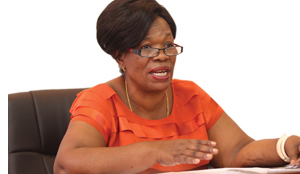 By CHILA NAMAIKO –
THE Government has condemned the manner in which police deployed at the Copperbelt University (CBU) to quell a protest by students over delayed meal allowances executed their duties leading to reported cases of some students being brutalised.
Higher Education Minister Nkandu Luo yesterday condemned in Parliament the reported brutality of students by officers, saying investigations were underway over the protests that ensued early this week among the students.
Professor Luo said it was for this reason that she did not tolerate protests or any riotous behaviour as in most cases majority of innocent students were caught up in the fracas while the ringleaders fled.
“I condemn in the strongest terms the way the police handled the situation in no particular sequence, and it’s the girls who suffer the most who are found in their rooms sleeping,” she said.
Prof Luo was responding to a follow-up question from UPND Monze central MP Jack Mwiimbu, who sought clarity on the conduct of  police when they deal with reports of students protesting over delayed meal allowances.
This was after Prof Luo responded to question for oral answers from UPND Choma MP Cornelius Mweetwa, who among other matters, wanted to know circumstances that led to protests and eventual death of a student at CBU.
Prof Luo clarified to the House that there was no report of death and the report circulating on social media of a CBU student having died was misleading.
She said the protest was over perceived delays in payments for meal allowances for term two of CBU Kitwe campus following a request by students’ union to prioritise payments for students at Ndola medical school as they had opened school earlier compared to the main campus.
Prof Luo said, despite Government commenced payments of allowances, the students leadership at River Side Campus decided to deceive the student populace through their publicity secretary.
The House that the publicity secretary posted information on notice boards accusing Government of having no money to pay the students, which was not a true reflection leading to students starting the protest.
Prof Luo cautioned politicians against sponsoring what she termed as Copperbelt University ‘Al Shaabab’ protest at the Kitwe campus and warned she would ban political branches in learning institutions.
She said she was following up the matter in collaboration with Home Affairs Minister Stephen Kampyongo to ensure the students that wore masks during the protests were identified.