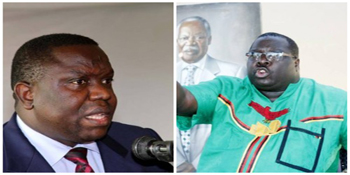 PATRIOTIC Front (PF) Mkushi South Member of Parliament Davies Chisopa has described as ‘wild outbursts’ the allegations of corruption made by former ministers Chishimba Kambwili and Harry Kalaba.
Mr Chisopa said the allegations by the two Members of Parliament were a manifestation of their failure to manage their frustrations.
He said it was curious that despite being involved with the opposition National Democratic Congress (NDC) for whom he serves as a consultant, Mr Kambwili had continued to contest the PF’s decision to expel him.
Mr Chisopa said in an interview that it was clear that frustration had taken the better of Mr Kambwili, the current MP for Roan in Luanshya and Mr Kalaba, the former Foreign Affairs minister who represents Bahati constituency.
He said it was common knowledge that Mr Kambwili, was the ‘de facto’ president of the NDC and an enemy of the PF which was ready to meet him on the battlefield.
He said it was strange that the two former ministers were keen to portray the PF-run government of President Edgar Lungu as corrupt but were not ready to leave the party.
He urged members of the public not to entertain any of the allegations the two were making if they could not back their claims with evidence.
“These are bitter people. I have always said that if you fail to manage frustration, you end up making wrong decisions…especially Honourable Kalaba, because for him, he still describes himself as PF. The moment he manages his frustration, he can settle down and become our lost son.
The Mkushi South parliamentarian said it was surprising that both MPs were still clinging to the ruling party even when it was clear that they did not believe in what the PF stood for.
He reiterated that the PF was still attractive to many Zambians, including the two critics who were refusing to leave the ruling party despite being asked to do so.
Meanwhile, Mr Kambwili was yesterday warned and cautioned for allegedly proposing violence.
Mr Kambwili and his co-accused arrived at Ndola Central Police in the company of his lawyers and sympathisers before proceeding for interrogations.
“We were interrogated and they have recorded a warn-and-caution that I am threatening the Chinese in Luanshya to do the right thing by recalling back all the miners who were out on recess and I was proposing violence against the Chinese nationals,” Mr Kambwili told journalists.
He also refuted accusations that he was sending emissaries to push for a return to the PF.
Copperbelt Police Commissioner Charity Katanga said Mr Kambwili had been warned and cautioned for proposing violence.
Ms Katanga said police had received information that miners in Luanshya were told to beat the Chinese investors as they were recruiting people who were not Luanshya residents.