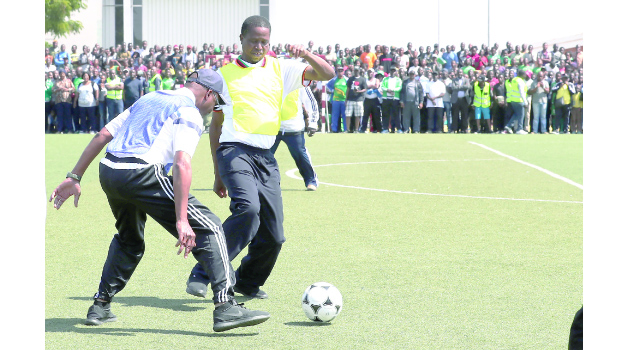 •PRESIDENT Edgar Lungu tries to dribble past Energy Minister Matthew Nkhuwa (left) during a football match as part of the launch of the National Health Week campaign activities at the Olympic Youth Development Centre in Lusaka yesterday. Picture by THOMAS NSAMA/STATE HOUSE

By STEVEN ZANDE –
PRESIDENT Edgar Lungu has launched the 2018 Health Week with a call for Zambians to emulate First Republican President Kenneth Kaunda’s disciplined lifestyle to maintain good health and live longer.
Mr Lungu has further implored traditional marriage counsellors (‘alangizi’) to help teach women the benefits of minding their weight as part of efforts to combat the alarming levels of obesity among women in the child-bearing age.
Mr Lungu urged Zambians to take a leaf from Dr Kaunda who had built his lifestyle around prudence and discipline, saying this was crucial to preventing illnesses like diabetes, cancer and heart disease.
“Obesity rates in children are rising faster than in adults. We cannot pass to our children a future of ill-health by adopting a laissez faire parenting attitude.
“Let us learn from the great man (Dr Kaunda) and take responsibility at individual and at national levels so that we can promote healthy behaviors,” he said.
He said this at the Olympic Youth Development Centre (OYDC) in Lusaka yesterday where he launched Health Week under the theme ‘Health for All: Leaving No One Behind’.
Mr Lungu reiterated that obesity was increasing becoming a serious public health threat and this had been escalating among the urban poor who could not afford the cost of medication required to manage lifestyle diseases.
He said men and women should be made to understand that obesity was not fashionable because it led to lifestyle diseases hence parents should monitor their children’s health to prevent the condition.
Mr Lungu said Government was using platforms like Health Week to escalate healthcare provision to ensure no one was remained behind because this was vital to attainment of of a healthy population and goals like Vision 2030.
Government departments, Non-Governmental Organisations (NGOs) and concerned stakeholders should each identify what they could do to contribute to good health in communities.
Health Minister Chutalu Chilufya said Health Week was part of Government’s efforts to enhance universal health coverage to citizens.
Provincial Minister Bowman Lusambo said the Lusaka administration was keen to promote good health among residents because this was a precursor to a productive and prosperous citizenry.
World Health Organisation (WHO) Country Director Nathan Bakyaita said the event provided an opportunity for stakeholders to redirect efforts and create awareness on disease spread and prevention to help foster a healthy population.
Dr Bakyaita praised Government for showing leadership by mobilising resources and forging partnerships with stakeholders to facilitate
Health Week which would help expand health service outreach in needy communities.