Fresh out of jail, Chingangu at it again as he’s caught trying to steal car
Published On May 9, 2018 » 3517 Views» By Davies M.M Chanda » Others, Sports
0 stars
Register to vote! 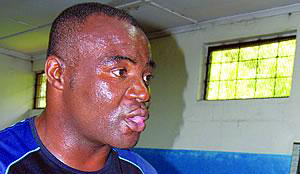 By SANDRA MWILA –
BARELY a month after he left prison, former boxing champion Joseph ‘No Pressure’ Ching’angu is back in police hands, having been saved from a lynching when he allegedly tried to steal a car from a Chalala address in Lusaka in the early hours of Monday
Police spokesperson Esther Katongo said in an interview yesterday and said that Ching’angu was apprehended in Chalala residential area for alleged theft of motor vehicle.
Katongo said owners of the house were awoken by a loud bang and spotted the former International Boxing Federation (IBF) junior heavyweight champion standing by the car when they peeped through the window.
It was then that the owner of the house and his son gave chase and caught Ching’angu but he extricated himself by fighting off the younger of his pursuers, who then responded by shouting for help.
The neighbours responded to the alarm in numbers and managed to catch the former boxing idol and then set upon him with blows and kicks.
Katongo said Ching’angu, who just came out of jail after serving a two-month sentence for burglary was then taken to the Police Station along with some bags and other assorted items that were found on him.
As he had suffered injuries from the beatings, Ching’angu had to be taken to the University Teaching
Hospital (UTH) where he was admitted for treatment.
Katongo added that Ching’angu would appear before the courts once he recovered.
And in a separate interview, UTH spokesperson Natalie Mashikolo confirmed Ching’angu was admitted at the hospital after he sustained cuts on the head.
Mashikolo said Ching’angu was admitted in ward GO1 under police guard and that his condition was stable.
“Yes, we do have a patient , Ching’angu, who is admitted in GO1and is under Police guard. He has cuts in the head but his condition is stable,” Mashikolo said.
Ching’angu has had a few run-ins with the law.
He was recently jailed for six months with hard labour after being convicted for breaking into a house in Kabwata Township in Lusaka on March 26, 2017.
In July 2016, Ching’angu was arrested for alleged motor vehicle theft when he stole a Toyota Probox belonging to Peng Teng Kang and was also charged with burglary and theft after he and some unknown persons broke into Peng’s house where they stole assorted items valued at K156, 752.
The case was, however, dismissed by the court after witnesses failed to show up.
Ching’angu was then badly lynched in August last year when he was allegedly caught attempting to steal some laptops from students at the University of Zambia.