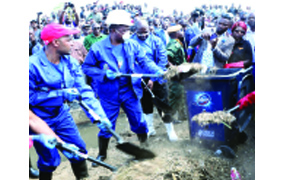 • THE President (centre) takes part in the cleaning exercise during the launch of the ‘Make Zambia clean, green and healthy campain’.