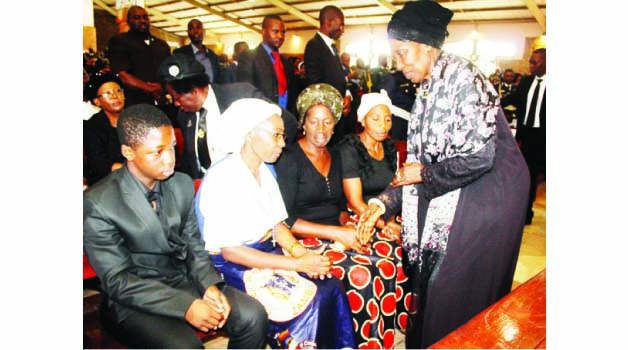 By KASONDE KASONDE –
VICE-President Inonge Wina has described the late Zambia Air Force (ZAF) Deputy Commander Major General Kapotwe Chintu as a big loss to his family, the Zambia Defence Forces and the nation at large.
Ms Wina said it was sad to lose a person whose persona and expertise had been held dear by the Zambian people and Government would remain indebted to his services.
“The late ZAF deputy commander and Chief of Air Staff was instrumental to the Government through his flying expertise. He flew most of the Government officials and most civic leaders including
myself in various operations within the country and abroad,” Ms Wina said.
She said Gen Chintu, who died last week in India, contributed immensely to the running of ZAF
in various appointments he held during his 39 years of service which included training of cadets at the academy and running various aircraft squadrons.
Ms Wina thanked the Indian government and the Indian Defence Force for the role they played during the send-off parade for his body and for facilitating its passage.
In a tribute to her husband, Gen Chintu’s window, Eva, described her husband as the hope of the family and a humble man.
Ms Chintu said her husband of 36 years was a loving man who believed in serving others at any given opportunity.
Chief Chiunda Ponde of the Bisa people of Mpika described Gen Chintu as having been a man who was respectful and whose works were beyond his family.
The funeral service was also attended by former Republican vice-president in the MMD Government Enock Kavindele, Secretary to Cabinet Ronald Msiska, Deputy Secretary to Cabinet ,Patrick Kangwa,
Presidential Affairs Minister Freedom Sikazwe and members of the diplomatic corps.
And several ministers among them Davis Chama for Defence, Stephen Kampyongo for Home Affairs, Jean Kapata, (Lands and Natural Resources) Chitalu Chilufya (Health minister), Given Lubinda (Justice minister) and Sylvia Chalikosa (Minister in the Vice President’s Office) were in attendance.
Gen Chintu died after an illness last week on Friday in Gurugram City, in the Indian State of Haryana just months after President Edgar Lungu appointed him Deputy ZAF Commander.He had joined ZAF on June 22, 1980.