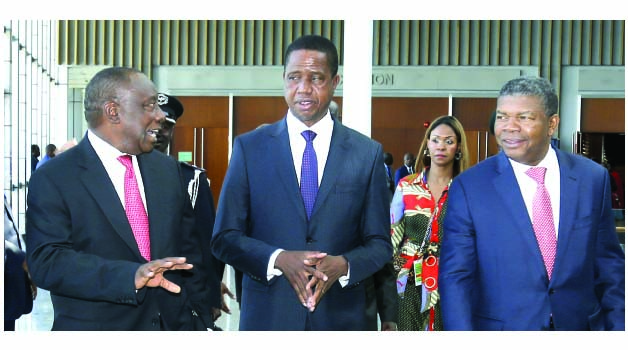 • FROM left to right:South Africa’s Cyril Rampahosa,President Edgar Lungu and Angola’s João Lourenço confer during the High Level Consultation Meeting of Heads of State and Government on the situation in the Democratic Republic of Congo in Addis Ababa, Ethiopia yesterday. Picture by SALIM HENRY/STATE HOUSE

By REBECCA MUSHOTA –
THE Southern Africa Development Community (SADC) Double Troika Heads of State Summit has called on all stakeholders both local and foreign to remain calm over the situation in the Democratic Republic of Congo (DRC) as the Constitutional Court hears the petition challenging the election results.
This is according to a communiqué issued yesterday in Addis Ababa where the Double Troika Summit of the Heads of State and Government of SADC called to discuss matters related to the DRC was held yesterday.
The Summit said that it recognised that there was a petition before the Constitutional Court and it urged all stakeholders to remain calm and allow the process to complete.
The Summit was officially opened by the SADC chairperson Hage Geingob, with SADC chair for the Organ on Politics, Defence and Security Cooperation President Edgar Lungu prominent among those who attended.
Others were Angola’s President João Lourenço, out-going chairperson of the Organ on Politics and president of South Africa Cyril Ramaphosa, out-going chairperson of SADC.
Other leaders in attendance were Tanzanian Foreign Affairs minister Augustin Mahiga, Zimbabwean Ambassador to the DRC Raphael Faranisi and the SADC Executive Secretary Stergomena Tax.
The meeting was also briefed by the DRC Foreign Affairs Minister Leonard Okitundu.
“The Summit took note of the election petition filed in the Constitutional Court challenging the provisional results of the presidential election and called upon all the Congolese people and all the concerned political stakeholders to remain calm and act in a way that consolidates democracy and preserves peace, and to address any electoral grievances in line with the Democratic Republic of Congo’s Constitution and relevant electoral laws,” the communiqué said.
The international community should respect the Constitution of the DRC and the internal legal and political processes for the finalisation of the electoral process.
The Summit called on the international community to respect the sovereignty and territorial integrity of the DRC in accordance with the African Union (AU) Constitutive Act, and the SADC Treaty.
The Summit also said the international community should support the Government of the DRC to maintain a peaceful and stable environment following the landmark elections, and avoid actions that were prejudicial to the electoral process.
The Summit congratulated the government of DRC and the Independent National Electoral Commission (CENI) for organising and conducting generally peaceful elections, notwithstanding some incidences and the logistical challenges, coupled with the impediments brought about by Ebola outbreak and security insurgencies.
The leaders commended the Congolese people and all political stakeholders for ensuring that the elections were conducted in a peaceful manner and also commended President Joseph Kabila for his leadership in holding the elections.
The Summit called for the continued implementation of the Peace, security and cooperation framework in the DRC and reaffirmed its commitment to continued support to the DRC’s political processes with respect to neutralising the negative forces and other armed groups operating in the eastern part of the country.
During the official opening of the Summit, President Geingob said the DRC was at a crossroads as the election process had both raised fear and hope.
President Geingob said the role of the region was to provide support and ensure peace and stability to the DRC.