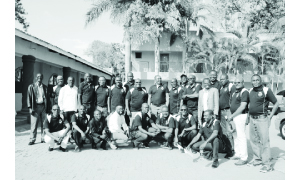 • EX-Mungwi boys who attended the AGM at Misuku Lodge in Kabwe.