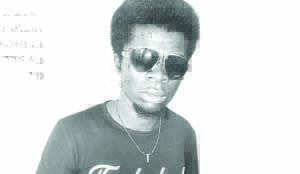 HE is a Copperbelt prodigy. To be precise he a  rapper based in Ndola.
Going by the name De’Real Wis’ D, his real names are Wisdom Chitabo, born on 30th December 1989 in Mwinilunga, North-Western Province.
He is from two families. On his mother’s side I’m from two he says “we are six and I am the second born and from Dad’s side we are six and I’m the fourth born,”
The pintsize upcoming rapper got inspired by slain American rapper Tupac’s music especially after listening to one of his hits Changes.
Initially, He was nicknamed Wizd by friends at Solwezi Technical High School where he did his high school.
The name was changed from Wizd to De’Real Wis’D after discovering they were a lot of Wizds out there and for uniqueness reason.
“I started writing music in 2010 when I was doing my Electrical craft certificate at Choma Trades where I became one of the best students in 2010 intake.” he said.
He later on started working with Cream Dollar in 2012 who raised him in music.
“He has honestly been there for me as a friend. I met a friend from Fanatic Gospel crew Alex who later introduced me to my current producer Frankie,” he said.
Chitabo did his first single “Formidable Love ft Leo” in December 2013.
This year in 2014 January he did a second single “My life ft Frankie” and is currently working on another single “Distance killing me too” all with Frankie at Chief Records.
Apart from that, he is working on coming up with his own record label to boost what he calls Zed Hip Hop.
All his music is being managed by The After12Teenage show that would soon be on airing.
The After12Teenage show is not only managing him but also managing Tp AKA Austin 820 and other upcoming artists.
“I would like to encourage my fellow upcoming artists to have managers and a vision. I have come to enjoy music because I’m able to express my emotions through it and it’s another way of helping out our own Government realise what people are going through,” he said.
This, he believes can also help boost development and creating employment in our country.