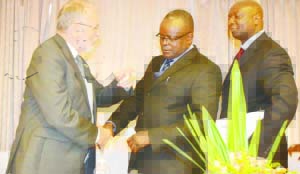 ZESCO has signed a US$163 million loan agreement with Nordea Bank AB of Sweden and Standard Bank of South Africa.
The loan agreement will result in the connection of the entire North-Western Province and some parts of Western Province to the national electricity grid.
The project involves the construction of an extensive 132KV sub-transmission lines totalling 840kilometres  as  well as establishing 132/33/11KV bulk supply sub-stations to facilitate electrification of public facilities, schools, rural health centres, Government institutions and chiefs’ palaces.
The aforementioned transmission lines will link Mwinilunga, Kabompo, Mufumbwe, Mumbejhi, Chavuma, Zambezi and Lukulu District in Western Province.
ZESCO signed an Engineering and Procurement Contract with Eletel Networks TE AB of Sweden to execute the project in 24 months and the contractor is expected to be on site by the end of this month.
Speaking during the signing ceremony, ZESCO managing director Cyprian Chitundu said reliability and quality of power supply in North-Western Province had been very poor as the rest of the province was currently supplied using isolated diesel generator sets, except Solwezi and Kasempa.
“These generator sets are not only expensive to run but also very unreliable. ZESCO currently spends in excess of $6 million annually in procuring diesel fuel, not to mention other operation and maintenance related costs which also amount to millions of Kwacha,” he said.
Mr Chitundu said besides guaranteeing a good quality electricity supply in the beneficiary areas, the project would also stimulate economic growth and development thereby improving the lives of the people.
The extensive 132KV sub-transmission grid, Mr Chitundu said, would provide points for future interconnection with the Angolan grid which could lead to improved regional electricity trade opportunities for telecommunications business using optic fibre.
Nordea Bank export and project finance director Marie Vetland said her bank was one of the highly reputable financial institutions in Europe and was pleased to partner with ZESCO and looked forward to long lasting cooperation with the power utility company.
Ms Vetland was also optimistic that the project would greatly improve the livelihoods of the people in the beneficiary areas through increased economic activities, among others.
Standard Bank South  Africa head of Export Credit Agency and cross-border finance Greg Fyfe assured that funds would be available shortly after certain conditions were met and wished the contractor success as it embarked on an ambitious project.
Mines, Energy and Water Development Deputy Minister Charles Zulu said Government was excited that the project was finally coming to fruition and was hopeful that it would put to rest concerns being raised by his fellow law-makers in Parliament.
Mr Zulu observed that there could be no meaningful development without electricity as industries or factories could not be established and thus deterring investment, no job-creation and revenue collection.