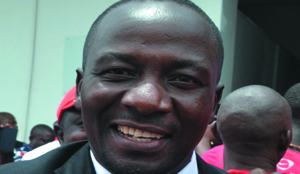 By FELIX  MALUNGA –
ZAMBIA’S envoys in the ongoing CAF inter-club competitions, Nkana and Zesco United are confident of progressing to the next stage of their respective tournaments tomorrow.
Nkana are faced with a tricky away test to Egyptian giants, Zamalek in the Champions League while Zesco should overturn a 2-0 deficit against Ghanaian side, Medeama to remain afloat in the Confederation Cup.
Nkana coach, Masautso Mwale is hoping his charges could produce some spectacular show in Cairo and knock out their hosts.
The Zambian champions managed to shock Uganda’s Kampala Capital Council Authority in the previous round and Mwale is planning for another upset in tomorrow’s assignment.
Despite Mwale and the entire team sounding confident for this task, Nkana had an injury scare on Thursday evening when defender, Maybin Chishimba strained his ankle during a training session in Cairo.
But Nkana medics ruled that the injury was not serious and instead assured the nation that the former Zambia Under-23 player would be fit for tomorrow’s fixture.
Yesterday, Chishimba rejoined his team mates as they continued shaping up for the Zamalek challenge.
And Zambia’s envoy in Egypt, Eliud Mutwale challenged Nkana to bring back glory to the nation by beating Zamalek tomorrow.
Mutwale, who visited the team at their hotel, said Zambians expected nothing but victory.
He said he was hopeful that Nkana would prevail over the Egyptians after a 0-0 draw in the first leg.
Meanwhile, Zesco defender, Bernard Mapili said the 2-0 defeat the Zambians suffered in Ghana was now history as the Ndola side was eager to bounce back tomorrow.
Mapili told the club’s website that the return leg tomorrow at Levy Mwanawasa Stadium would be a different ball game as it would avail a chance to Zesco to prove themselves and qualify to the next stage.
Coach George Lwandamina believes Zesco was capable of upstaging Medeama and get to the next round.