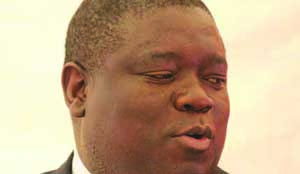 By JAMES KUNDA-
ALL the 32 contractors have moved on site to overhaul the Zambia Railway Limited (ZRL) track from Livingstone to Chililabombwe,
Transport, Works, Supply and Communications Minister Yamfwa Mukanga has said.
Mr Mukanga said the move to rehabilitate the stretch from Livingstone to Chililabombwe was intended to increase train speed and delivery of goods on time.
He said in an interview that the Government was in the process of re-introducing the Njanji commuter train to attract more people to rail transport.
And the ZRL has allocated five wagons and eight coaches towards the revival of the Mulobezi railway, linking Southern and Western Provinces.
Mr Mukanga said the Mulobezi railway would soon be operational to ease the movement of goods and people.
The wagons and coaches were bought using part of the US$120 million Eurobond grant that Government gave ZRL.
Government repossessed the Mulobezi railway by revoking a concession agreement that the defunct Railway Systems of Zambia had signed with Leasons General Contractors.
The railway was handed over to ZRL with a mandate to revamp operations by the first quarter of 2014.
“Five wagons and eight coaches have already been sent to Mulobezi and that the railway will soon be operational to ease the movement of goods and people in that area,” the minister said.
Mr Mukanga said that ZRL had targeted to allocate 50 wagons to enhance operations along the Chipata-Muchinji railway this year.
“Thirty-five wagons have already been sent to Muchinji but the target is to have 50 operating there to enhance profitability,” he said.