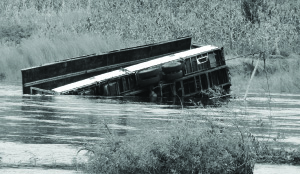 •THE Samfya pontoon on Chambeshi River sunk in the river together with an Isuzu truck, while crossing from Kasama to Shiwangándu District.Picture by JONATHAN MUKUKA-ZANIS