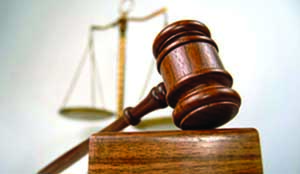 By LUMBIWE MWANZA –
TWO soldiers from Mushili commando unit appeared before a Ndola magistrate court yesterday for allegedly assaulting three police officers.
Temba Chisenga, 28, and Andrew Chisha, 24, of single quarters one commando, appeared before magistrate Moffat Phiri on three counts of assaulting three police officers Zuze Mbewe, Clement Musakuzi and Thomson Chapanga from Ndola central police, during the execution of their duties.
Particulars of the offence are that on May 29, 2014, Chisenga and Chisha allegedly assaulted the three police officers who were on duty.
Chisenga and Chisha pleaded not guilty to the charge and Mr Phiri adjourned the case to July 24, 2014, for commencement of trial.
Meanwhile, Mr Phiri sentenced a 22-year-old man to three months imprisonment with hard labour for trafficking in 2.1 grammes of marijuana.
This is in a matter in which Jack Phiri of house number 1357, Lubuto Township was charged with trafficking marijuana.
Particulars of the offence are that on June 23, 2014, around 02:00 hrs Vincent Kasonde, a crime prevention officer, arrested Phiri for causing a disturbance at Lubuto community centre.
Mr Kasonde said Phiri was found with cigarettes when he was apprehended that later were confirmed as marijuana.
Mr Phiri also sentenced Nelson Zimba, 24, to five months imprisonment with hard labour for stealing two motor vehicle batteries and 30 litres of engine oil worth K2,900 from Everisto Sinkande.