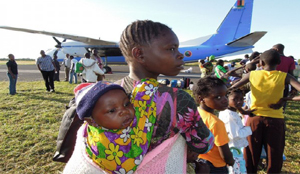 By PERPETUAL
SICHIKWENKWE-
AN INFLUX of Angolans has been recorded in Chavuma in North-Western Province seeking HIV/AIDS and Tuberculosis treatment among others, Chavuma District Commissioner Lawrence Kayumba has said.
Health Deputy Minister Chitalu Chilufya who is in the province to check on the health sector’s performance said foreigners seeking medical treatment should not be denied the service.
Mr Kayumba informed Dr Chilufya of the development during a courtesy call at his office yesterday.
Mr Kayumba said the Angolans travelled long distances seeking medical attention in Nguvu and Chingi rural health posts and Chavuma Mission Hospital.
“Poor referral from our neighbours leads to maternal deaths and we are having an influx of Angolan nationals seeking medical attention in most health centres here,” Mr Kayumba said.
However, Dr Chilufya said Government expected hospitals that were near the border areas to include foreign nationals as they discharged health services.
Dr Chilufya said this when Kalene Mission Hospital resident doctor, Felix Chibuye sought his guidance regarding the influx of Angolan nationals seeking medical attention for HIV/AIDS and TB.
“We don’t deny people health services. Government expects hospitals when doing their planning to plan for their catchment population which includes people living across the borders,” Dr Chilufya said.
Meanwhile, Dr Chibuye said the Churches Health Association of Zambia (CHAZ) group that was funding the HIV/AIDS programme had expressed concern at the number of people that were defaulting on medication but they did not give a clear guidance on whether foreigners should be attended to.
“It was mainly to do with the default, most of them (foreigners) are not able to come back in time and some of them will come once and will never show up again because of the distance issues,” he said.
Dr Chibuye, however, said that those who did not default were still on the register.