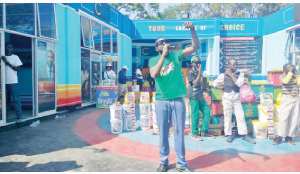 •DANCER Popo in action at the Trade Kings and Muvi TV stand at the Zambia International Trade Fair.

GROUND Focus has invested over US$250,000 in buying filming equipment and training of its stuff in the filming industry.
Ground Focus, a company behind Kumwesu soap on DStv on channel 154 has invested heavily in the filming industry as a way of creating employment in the country.
Managing Director Jimmy Mubashi said nine Zambians had been taken to South Africa for training in film productions and were solely sponsored by Ground Focus.
Kumwesu is a born and bread Zambian product and is aired three times a week every Mondays at 17:30 and repeated at 20:30 and Tuesdays at 9:30 hours.
Mr Mubashi stressed that many people in Zambia did not have the experience in film production, therefore Zambians were learning the skills and in due time Zambians would take over.
He said the show was only aired for 30 minutes because there were no Zambian sponsors to come on board and push for the programme.
He said currently, South Africans were sponsoring the show hence; the company had no much control on it.
Mr Mubashi said the reason for coming up with the show was because the company wanted to change the perception of copying of westernised lifestyle.
He said this was another way of selling our culture and letting the western world know the beauty of the African side, particularly Zambia.
“With this kind of investment made and knowledge acquired from the trainings the stuff are undergoing, we will be able to create employment for our people and be able to stand on our own and everything would be done locally and Africa would soon see a new face in film production.
“Many of our people do not have the experience, so Zambians were learning the skills and in due time would take over,” he said.
Mr Mubashi said many people the company employed were graduates and were learning skills from foreigners that the company had employed.
He said the company provided a platform for all forms of businesses to advertise on the show and that it was to the advertisers’ advantage as they would be popular to the millions that watch Kumwesu.