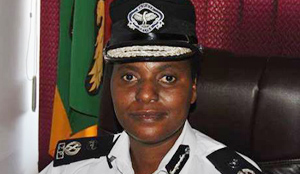 By SYLVIA MWEETWA and MOFFAT CHAZINGWA –
FIVE masked men armed with axes and two firearms staged a daring morning robbery in Kabwe’s town centre, snatching over K200,000 and assaulting a shop owner.
The bandits held a shop owner and his customers hostage after storming BM Distributors around 08:30 hours, demanding to be given money.
They arrived at the shop, which is opposite the civic centre, in an unregistered Toyota Spacio and immediately ordered everyone to lie on the floor and told shop owner Satish Patel to hand over the money.
Mr Patel sustained a deep cut on his neck after he was hit with a gun butt for resisting to cooperate with the robbers.
According to witnesses who were in the shop at the time, the bandits later forced Mr Patel to open the safe containing money while wielding an axe and threatened to chop off his head.
One Bandit had remained in the get away vehicle and the vendors outside the shop were also made to lie down on the floor and threatened against raising alarm.
Central Province Commissioner of Police, Standwell Lungu said the criminals got away with K258,384 cash and that no arrests or recovery had been made.
Mr Lungu, however, said police were investigating the matter and that they suspected that the robbery was an inside job.
Police only arrived after the robbers had sped away.
Meanwhile, a 43-year-old woman and her two children, aged four and two, tragically died in Kitwe when the house they were sleeping in was burnt to the ground.
The inferno started from the bedroom where the three were sleeping before it spread to the living room and later the kitchen where four other people were sleeping.
The four people in the kitchen, however, managed to escape unhurt.
Copperbelt Police Chief Joyce Kasosa and Kitwe Mayor Kelvin Sinyangwe, confirmed the tragedy that happened on Sunday around 23:00 hours and named the woman Veronica Mulenga and her two daughters, Joan Mutale, four, and Mwewa Mutale, two, of house number MS 2712 Mulenga Township.
“The three died on the spot and we suspect that the source of fire was a candle which was left burning before the deceased went to sleep,” Ms Kasosa said.
Mr Sinyangwe who inspected the gutted house before consoling the bereaved family expressed sadness at the tragic death of the three family members.