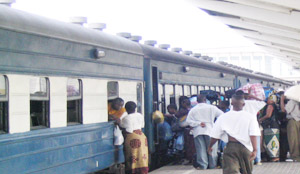 THE railway network has a critical role to play in the economic development of a country, especially a landlocked country like Zambia.-
And as President Michael Sata rightly says, there is need to revitalise Zambia’s railway transport sector, which was literally grounded following the concessioning of Zambia Railways to South African investors by the MMD government.
Indeed, landlocked Zambia is strategically positioned and revitalising her railway sector would certainly reposition the country as a regional hub for business transactions.
Economic benefits of such a move cannot be doubted because they were evident prior to Zambia’s economic liberation which saw the near-death of Zambia Railways as the major means of both cargo and passenger transportation.
It was clear that even with the problems encountered when the white minority regimes to the south of the country forced the closure of the southern route, nearly all of Zambia’s foreign trade was transported by rail.
In this respect Zambia remains indebted to the People’s Republic of China that came to the rescue with the building of the famous Uhuru Railway, the Tanzania Zambia Railway Authority (TAZARA) co-owned by Zambia and Tanzania.
This gave Zambia a lifeline as the bulk of the country’s exports, and even imports, used this 1,860-long-kilometre railway line which links the two sister nations from Kapiri Mposhi and Dar-es-Salaam.
However, following the ‘disturbances’ that followed the concessioning of Zambia Railways, the northern rail route also equally became affected and could no longer handle as much cargo as it used to previously.
This turn of events saw Zambia’s roads start handling much of the imports and exports as trucks suddenly became the dominant mode of transporting goods.
While this could be seen in the short-term as economically viable, it in the long run hurt the Zambian economy even much more because it resulted in the damage of roads by the heavy trucks loaded with all sorts of heavy goods.
As if this was not bad enough, the trucks worsened traffic congestion on long-haul routes, further raising other concerns which were mainly to do with safety.
It is indisputable that an increase in the road traffic accidents which the country has been experiencing has been partly attributed to an increase in the number of trucks using long-distance routes.
Deaths of persons, as well as damage to vehicles and other property resulting from these accidents have all tended to be a drawback on the economic gains the country has achieved.
These by-and-large led to widespread calls on the Zambian Government to cancel the concession agreement the MMD government had entered into with South Africa’s Spoornet, repossess the underperforming Zambia Railways, which had then changed the name to Railway Systems of Zambia and revitalise the company.
The idea was to reverse the trend where the railway lines could once again become major transporters of heavy goods as was the norm in the past.
Since the Patriotic Front Government came into power, plans have, therefore, been under way to revitalise other existing railway lines and even construct new ones.
As the President says, those to be revitalised include the Mulobezi, which was concessioned to a local company, as well as the Nacala Corridor which is a gateway to Angolan sea ports.
Indeed, as the President Sata says, developing other railway lines such as the Chingola-Jimbe’s in North-Western Province, Northern region’s Nseluka-Mpulungu line, Chipata-Mpika, the Kafue Lion Den and the Livingstone-Katima Mulilo railway lines have all the potential to make Zambia an economic hub of this region, and the move deserves the support of all Zambians.