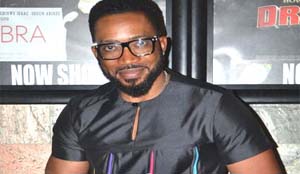 VETERAN Nigerian actor Alex Usifo was a main spectacle at Lusaka’s Levy Park last Friday when he and two other youthful brilliant actors Fredrick Leonard and Chimwe Isaac walked the red carpet to premiere Andy Boyo’s latest production ‘Cobra.’
Levy Park’s Fresh View cinema area was filled with people waiting for the Nollywood stars – without doubt, Alex especially; whose acting career dates back from as far as 30 years ago actually before the birth of Nollywood.
The actors, who were in the country, courtesy of Afrowood Zambia, were expected to meet their fans at Levy Park at exactly 19:00 hours, however, delayed for over an hour raising anxiety among some fans who would not wait to see the stars.
Minutes before 21:00 hours, the long awaited stars appeared in the company of Afrowood Director Kangwa Chileshe and one of Zambia’s finest actress Nancy Handabile much to the delight of the long awaiting fans.
Obviously, Alex stole the limelight as fans took turns taking pictures with him while addressing him as ‘chief’ or ‘Igwe’.
Afrowood director and a few of his helpers had a tough time of trying to control the crowd though Alex seemed to enjoy his stardom among his fans.
He appeared to be a down to earth man the opposite serious and cruel role he has played in most of the movies.
Although Alex was showered with praises and adoration, he continued reminding his fans to watch out for the other two stars Chimwe and Fredrick as they were the main stars in the movie ‘Cobra’.
True to Alexi’s humble words, the aftermath of the movie led to the discovery of the immense talents hidden under Fredrick’s and Chimwe’s sleeves, thus the attention shifting from Alex to the ‘newly’ discovered stars.
It was now Fredrick and Chimwe’s time to enjoy hero’s worships as the fans fought their ways trough the human thicket to take pictures with them though Alex still remained magnetic, qualifying the saying: “Once a legend always a legend”.
Award winning Nollywood film producer, director and actor Andy Boyo is happy that Zambia has proved to be one of the countries that has appreciated and supported the growth of Nollywood.
He says he has seen Zambia’s potential film stars and that his next move is to star Zambian actors in the Nollywood films.
Now, although Alex’s main wish was to meet First Republican President Kenneth Kaunda, an effort that never materialised. He was, however, happy with what he described as sweet and warm Zambian reception.
“This is a wonderful country with very nice people beyond description … that is why it will be my greatest pleasure to act with Zambians in any future movies,” he says.
The seemingly interesting and captivating story of Cobra sees Princess Hilda and her husband pay a ransom in gold coins worth US$1 million for the release of their kidnapped daughter by chief Ashonowo and his cohort.
In order to have a swift and affective operation the crime ring employs Cobra for the collection of the ransom. Chief Ashonowo being a shroud criminal lord received the ransom and thereafter shots Cobra.
On Cobra’s release from jail, he swears to have his revenge on chief Ashonowo.
It was interesting to see the fine looking Fredrick ‘Cobra’ and the undoubtedly stunning beauty in Chimwe Isaac ‘Kikki’ take the leading roles in the movie. Actually as for Chimwe, She stars as a twin in the movie as Kikki and Bibbi.
The African story full of drama, suspense and intrigue is well told in the premiered ‘Cobra’. Thanks to the experienced array of actors and the award-winning hands of Andy Boyo.