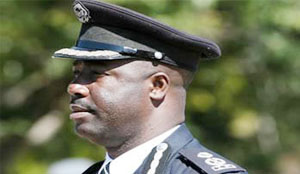 By PERPETUAL SICHIKWENKWE
and REBECCA MUSHOTA-
POLICE in Lusaka have arrested a teacher at Roma Girls Secondary School who severely beat up his head teacher for locking up his house, over failure by the teacher to pay rentals.
Lusaka Province Police chief Lemmy Kajoba confirmed the arrest of Daswell Sichilongo, a science teacher, who has since been charged with assault.
Mr Sichilongo on Saturday beat up Emma Chapalesa, a Catholic nun, in full view of a Muvi Television crew after the sister locked up houses of teachers who were defaulting on paying rentals.
The Catholic Church owns houses at the school and teachers pay rentals at a subsidised fee of K300 per month, but some teachers including Mr Sichilongo had been defaulting.
This prompted Sr Chapalesa to lock up the houses of defaulting teachers in a bid to force them pay rentals.
But her move angered Mr Sichilongo 53, who rained blows on his superior. Mr Kajoba said Police has since arrested Mr Sichilongo and he was being held at Chelstone Police Station.
He said Mr Sichilongo would appear in court this week. Meanwhile, Non-Governmental Organisations Coordinating Council (NGOCC) chairperson Beatrice Grillo condemned the beating of Sr Chapalesa, despite Mr Sichilongo having been frustrated or angered by the happenings around him. She said the best Mr Sichilongo could have done was to engage relevant authorities or appeal to well-wishers for help instead of beating up the woman, who was just doing her work.
Meanwhile, man of Ndola’s Lubuto Township has died from suspected poisoning during a drinking outing.
Ronnie Dukumesi Phiri of Lubuto Township died in Ndola Central Hospital (NCH) on Saturday around 15:00 hours after he was allegedly given poison by his acquaintances at a bar.
The father to the deceased, Ronnie Phiri senior, said in an interview from the funeral house at KS 4451 Lubuto Chintu Township yesterday that his son went to drink beer at a named bar with friends on Saturday evening.
Mr Phiri said his son, who works for GS Trucking Limited, was allegedly taken home within Lubuto Township by some people he knew.
“Am told that they took him home just after midnight by people he knew because they put him in his room. But his landlady soon after, heard my son mourning and that is how she took him to the hospital,” he said.
He said his son died on arrival at the hospital.
Ronnie’s landlady’s daughter Chilufya Minata said in an interview yesterday that she was not aware of what could have happened to him earlier, until she heard him making desperate noises.
Ms Minata said her and her family heard noises from Ronnie’s house, which is behind her own, as though he was chocking.
She said they quickly rushed to the house and they found he had foamed at the mouth and rushed him to the hospital.