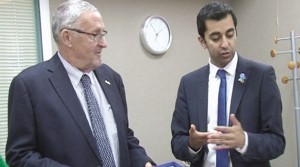 From ELIAS CHIPEPO
In Glasgow-
THE Scottish government says it values Zambia’s appreciation and advancement of human rights in Southern Africa.
Speaking after a closed-door meeting with Vice-President Guy Scott, Scottish Minister for External Affairs and International Development Humza Yousaf said that his Government respected Zambia’s observance of human rights within the regional context.
Mr Yousaf said Zambia had made progress in advancing human rights across the board compared with other countries in the region.
He said he understood that human rights existed within the regional and cultural contexts and that this needed to be respected.
During the same meeting, Dr Scott expressed Zambia’s willingness to enhance relations between the two nations.
First Secretary for Press at the Zambian High Commission in the United Kingdom, Amos Chanda said the Vice-President was happy with the meeting, which he said was aimed at building on the bilateral economic and governance cooperation that already existed.
Meanwhile, Mr Yousaf expressed happiness with the meeting, saying the two countries had agreed to strengthen the trade and industry relationship, especially in Whiskey, which is one of his country’s greatest exports and hoped to have a bigger footprint in Zambia.
“I think we would love to explore the area of food and drink, especially that sea foods are popular in Southern Africa, as well as our Scottish Whiskey. But I hope our companies can appreciate the investment opportunities that Zambia offers,” he said.
Mr Yousaf said while he could not force the investors to invest in a particular country, he expressed happiness with the leadership role the Zambian Government was playing in terms of development.
“Of course I cannot dictate where companies invest but I was really impressed with the investment opportunities in Zambia and I would like to see them make that investment,” Mr Yousaf said.
“I hope through these Commonwealth Games, we can make people see what we are able to offer and I am happy that the Zambia Development Agency is here and we shall ensure they meet with our agency here and discuss various issues.”
He said the meeting also discussed humanity and poverty that existed in rural parts of Zambia and what role Scotland could play.
During his stay in Glasgow, Dr Scott will, in between watching the Commonwealth Games, attend the Commonwealth Business Conference that starts today and will later visit a jam-making factory.
He will also be a panel speaker at an international development event on Thursday and will meet with Zambians in Scotland on Friday before his departure back home on Saturday.