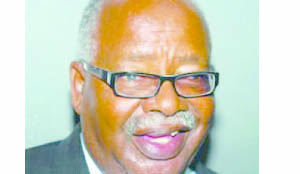 By BRIAN HATYOKA and ANDREW PHIRI –

SOUTHERN Province Minister Daniel Munkombwe has advised residents of Western and Southern provinces to take advantage of the rehabilitated Mulobezi Railway line to promote trade and other businesses.

Mr Munkombwe said the Patriotic Front (PF) Government had spent huge sums of money to upgrade the line, which was in a dilapidated state until this year, and hence it was important that residents utilised the facility.

He said it was a wonderful development for the Government, through Zambia Railways Limited (ZRL), to rehabilitate Mulobezi Railway line which was neglected by the previous governments.

He was speaking in an interview in Choma on Wednesday.

“President Michael Sata’s Government has liberated the people of Mulobezi, Kazungula and Livingstone within a short period.

This train was on its ‘death bed’ and it is a miracle to have a new train running smoothly now,” Mr Munkombwe said.

He said residents had all the reasons to support PF during elections as the Government had done a lot to support the area.

“We are a working Government and we have made the people of Mulobezi, Kazungula and Livingstone to come out of darkness,” Mr Munkombwe said.

The old train used to move for about two days on a journey of 163 kilometres from Livingstone in Southern Province to Mulobezi in Western Province due to its poor state and obsolete rail infrastructure.

Some people used to sit on the floor inside due to poor sitting facilities while the train had no lights inside, therefore, making travelling in the night unsafe.

Until early this year when the PF Government started the rehabilitation work, the line which was built between 1905 and 1930 had never been upgraded.

Meanwhile, Mulobezi has seen a number of developments since it was declared a district last year, acting Mulobezi District Commissioner Pais Mambo has said.

Mr Mambo said other than the rehabilitation of the Mulobezi railway line, the Government had completed the construction of the National Assembly Office.

He said the people of Mulobezi were happy that the Government was planning to upgrade the Simungoma-Kaoma road under the Link Zambia 8,000 project which was a major route connecting the district to other parts of the country.

Mr Mambo said in an interview that the road was almost impassable during the rainy season, a thing he said disadvantaged the people in the area.

“With the coming of a new train and rehabilitation of the rail line here in Mulobezi, we will have easy transportation from here to Livingstone.

“This has also helped create employment for the locals. We want this rail line to be extended to neighboring countries like Namibia, Bostwana and Angola,” Mr Mambo said.

Mr Mambo however said the district had a challenge with electricity especially for the health posts.