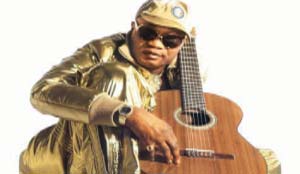 Congolese Rumba musician Koffi Olomide last Friday night barred journalists from covering another dismal performance at Mulungushi International Conference Centre.
One fact for sure is that Koffi’s performance was as bad as from the previous years which he would not have loved the media to highlight.
The artistic glamorous and expensive look that was associated with this once upon a time Rumba maestro by Zambian fans has clearly faded.
Even those who attended his show have confessed that it was just the ‘name’ they followed, saying that what Koffi offered on stage was not worthy the money spent.
The fact remains that the old man’s days of glory are slowling slipping away from him.
Some of the people who watched Koffi had no kind words for him after watching what they described as nothing compared to his hey day of Papa Plus and Civilise.
One of his fans that preferred anonymity says it was unfortunate the entertainment journalists were barred from Koffi’s show because there was a very good story to write about his fallen standards.
“The old man came on stage way too late and even if I am a Rumba fan, I regretted having spent my money on such a show, there was nothing new and nothing exciting, Koffi is finished,” the source said.
Veteran Zambian musician Brian Shakarongo says only someone who has something to hide can bar journalists from covering him.
“I am sure if you asked him why he barred you from entering, he wouldn’t have an answer because strictly speaking, there was no need to do that if he knew he was in form and clean,” said Shakarongo.
Shakarongo has also taken a swipe against promoters who should guide people they bring in the country for performances.
“How can he treat journalists who have contributed to making his name all these years? Even us Zambians who continue embracing and promoting such nonsense should shoulder the blame,” says Shakarongo.