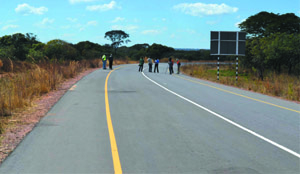 •PART of the Mbala-Nakonde Road being tarred.