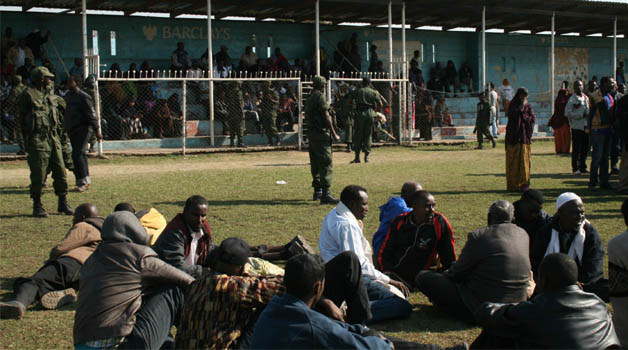 Part of the 600 foreigners suspected to be prohibited immigrants, who were rounded up by a combined team of officers from the Immigration Department, Drug-Enforcement Commission (DEC) and Police in Ndola yesterday.

By REBECCA MUSHOTA and DELPHINE ZULU –

MORE than 600 foreigners, mainly Somalis suspected to be prohibited immigrants, were in the early hours of yesterday rounded up by a combined team of officers from the Immigration Department, Drug-Enforcement Commission (DEC) and Police in Ndola.

Most of the foreigners were picked up in Ndeke Township in a raid that started just after midnight, while others were nabbed in Skyways, Twapia, Itawa and Kansenshi residential areas as well as the industrial area.

The suspects were then bundled into vehicles and taken to Musa Kasonka Stadium in Masala Township in a crackdown that lasted for many hours.

A check at the stadium around 08:00 hours found the suspected illegal immigrants being screened by DEC and Immigration officers while police dressed in riot gear kept watch.

Immigration Department public relations officer Namati Nshinka said in an interview later that 680 foreigners, majority of who were Somalis, a few Egyptians and Ugandans were rounded up in the operation but after screening, only 200 were detained.

Mr Nshinka said most of those detained in police custody did not have documents while a few had papers that needed to be verified and would be detained until either prosecution or clearance.

Meanwhile, in Lusaka, more than 136 illegal immigrants have been rounded up in three townships by a combined team of security wings.

The detained illegal immigrants, mostly Somalis, are among those apprehended after a search in Lusaka’s Emmasdale, Matero and Chaisa townships on Tuesday by the police, DEC and Immigration Department.

Some of those detained by the police were found with various illicit drugs, large sums of money and information technology equipment suspected to be used for pornographic materials.

Home Affairs head of public relations, Moses Suwali said more than 136 suspected illegal immigrants had been detained after a thorough screening, and most of them had no proper documentation allowing them to be in Zambia.

“About 136 illegal immigrants were found with no documents and have since been detained in police custody spread in various police stations in Lusaka, and the screening process will continue because some of them claimed that they had left the documents at their homes,” Mr Suwali said.