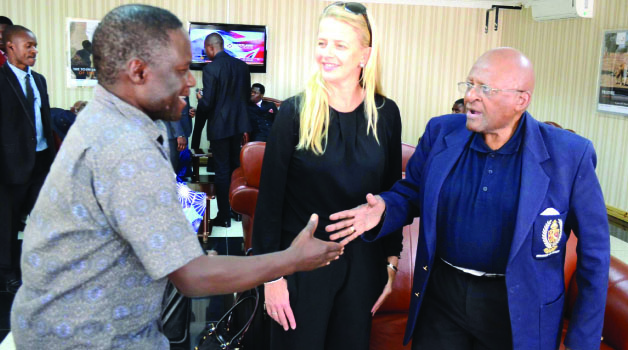 By CHARITY MOONGA –
SOUTH African Nobel peace prize winner Desmond Tutu has called for a worldwide end to child marriages.
Archbishop Tutu said this on arrival at the Kenneth Kaunda International Airport (KKIA) yesterday.
The retired Anglican Archbishop and anti-apartheid leader, who is accompanied by chairperson of Girls Not Brides, Princess Mabel van Oranje, is in Zambia on a four-day visit to support and encourage efforts to end child marriage.
He said he was committed to ending child marriages not just in Africa but world over.
Archbishop Tutu said he wanted to learn from Zambia by working with traditional leaders and various civil society organisations on the best way to end the vice.
He said there was need to engage all organisations to end child marriages.
‘‘We want to learn from each other on the best way to end child marriage,’’ he said.
Archbishop Tutu, who is the co-founder of ‘Girls Not Brides’, said his organisation started four years ago and targeted to prevent and end at least 10 million girl marriages per year and later moved to 15million because the organisation realised that every two seconds, a girl was getting married.
Meanwhile, Archbishop Tutu has commended Zambia for the role it played in assisting fight apartheid in South Africa
‘‘Thanks to Zambia for the critical role it played to support the anti-apartheid fight. It’s a joy for me to come here and say it,’’ he said.
Princess Oranje said it was sad that 42 per cent of children in Zambia were married before the age of 18.
She said she was happy to be in Zambia to learn how the Government and various other groups were managing the issue of child marriages.
‘‘We want the world to learn about what is happening in Zambia concerning child marriages and how the issue is being tackled,’’ she said.