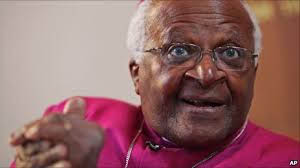 Anti-apartheid icon Desmond Tutu is impressed with the remarkable coalition amongst stakeholders in fighting child marriages in Zambia.
Archbishop Tutu was pleased with the intensity that Zambia was tackling the scourge and encouraged Zambians to build on the strong commitment.
Speaking during the Girls Not Brides, Global Partnership to End Child Marriages press conference, the cleric commended Government for launching the national campaign to end child marriages.
“It is encouraging to see that Government, civil society, traditional leaders and others in Zambia have recognised that child marriage has a devastating impact on girls and the nation as a whole.
“I am very impressed by the determination of all those we have met who are working to bring an end to this scourge. But the challenge of child marriage remains pressing,” he said.
He implored the traditional leaders to amend traditional customs that held girls and their communities back as they had influence to make their subjects understand the disadvantages of child marriages.
On administering of contraceptives to children, the archbishop called for intensified education on how girls needed to conduct themselves.
“We need to do everything to minimise the action the girls would take though it would be difficult to attain because no matter how much we mention this, they are still sexually active,” he said.
Princess Mable van Oranje, who is chairperson of Girls Not Brides, said customary and statutory pieces of legislation needed to be harmonised to have an accurate minimum age.
She said the fight against child marriages required a lot of investment and praised the country for a good integrated approach towards the matter.