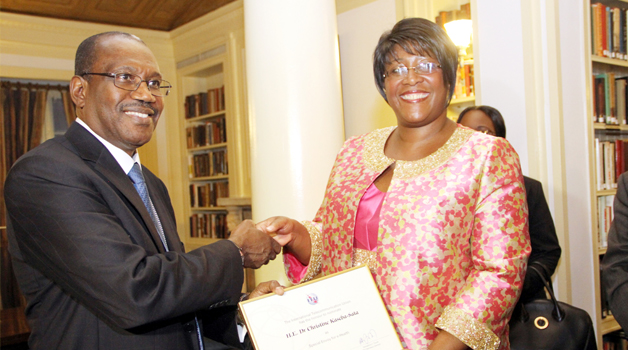 • First Lady Dr Christine Kaseba being inaugurated as a special envoy for e-Health by International Telecommunications Union secretary general Hamadoun Toure at Yale Club. This was on the sidelines of the 69th UN General Assembly in New York on Sunday. Picture by THOMAS NSAMA

By PERPETUAL SICHIKWENKWE –
THE Government has congratulated First Lady Christine Kaseba on her being honoured as the first special envoy of Electronic Health (e-health) by the International Telecommunications Union.
Dr Kaseba, who is in the United States of America (USA) with President Michael Sata, was conferred with the honour at the ongoing 69th United Nations General Assembly in New York.
Government spokesperson and Minister of Information Joseph Katema said the recognition of Dr Kaseba added to the growing list of international accolades the First Lady had and continued to receive.
Dr Katema said this was all because of Dr Kaseba’s passion, love and selfless service above and beyond the normal call of duty, especially in championing the welfare and wellbeing of women and children.
“The Government notes with pride that in May last year, the First Lady received a Frontline Award from the Global Coalition on Health in recognition of her work in women and children health issues,” Dr Katema said.
“The Coalition also recognised her work in reproductive health, cervical cancer and her efforts to improve maternal health.”