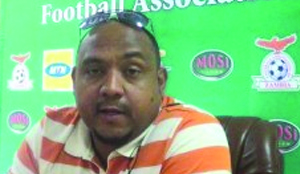 By MOSES CHIMFWEMBE –
THE Football Association of Zambia (FAZ) has disowned the Under-20 squad that leaves for Zimbabwe today ahead of the COSAFA Youth Championship which kicks off tomorrow in Bulawayo.
FAZ executive member Lee Kawanu said yesterday that the 18-member team that is scheduled to compete at this year’s edition of the COSAFA youth tournament has no blessings from FAZ.
Kawanu, who is also in charge of youth football said the association has not received any communication from the organisers to have the team list changed ahead of the tournament to organised under the African Union Sports Commission (AUSC) Region Five Games.
FAZ wanted to change the team list that was initially submitted claiming that regular players from both the Under-17 and 20 sides that qualified to the Africa Junior and Youth Championships respectively were missing.
But FAZ had by yesterday not received any correspondence leaving the team that earlier submitted to travel along with the rest of Team Zambia, who were delayed owing to accommodation problems in Bulawayo.
“We have not heard anything from the organisers and therefore, the team that is scheduled to leave tomorrow (today) has nothing to do with us because we don’t recognise it.
Both the Under-17 and the Under-20 teams have continental championships next year and we needed to use this competition either team shape up well so we think sending such a team will not achieve anything in the interest of the teams because we will have to organise friendly games for the teams,” Kawanu said.
He said FAZ was now pondering on possible friendly games with neighbouring countries to prepare the Under-20 team for the Africa Youth Championship.
Meanwhile, team manager for the Zambian contingent Pritchard Ngoma has said the coach Hector Chilombo drilled Under-20 squad was in high spirits ahead of the competition.
“The team has been training very hard at Heroes stadium and they are fully prepared to challenge for the title,” Ngoma said.
The Under-20 team has Mangani Banda, Jonathan Phiri, Harrison Chisala, Boyd Mkandawire, Samson Banda, Paul Banda, Sydney Phiri, Samson Sakala, George Mandu, Albert Musonda, Kasashi Lupiya, Patson Daka, Patrick Ngoma, John Musonda, Kingsley Mukuka, Charles Yande, Moses Phiri and Crispin Sakulanda
The Zambian contingent that is expected to leave early this morning by road has 58 athletes and 36 officials.