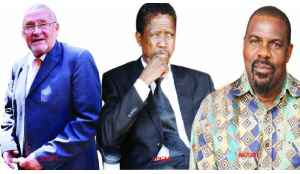 By PERPETUAL SICHIKWENKWE –
LUSAKA politician Newton Ng’uni has asked Lusaka High Court judge Gertrude Chawatama to stay her ruling in which she removed Acting
President Guy Scott and Defence and Justice Minister Edgar Lungu from the case he sued them over the transfer of Presidential instruments of power.
Mr Ng’uni, who had sued Dr Scott, Mr Lungu and Attorney General Musa Mwenye, wants the High Court to stay the ruling in which it removed the two from the proceedings while he appeals to the Supreme Court.
He has also filed before Ms Justice Chawatama summons for leave to appeal to the Supreme Court against her decision to order for the removal of Dr Scott and Mr Lungu as respondents after Mr Mwenye applied to have them removed.
Mr Mwenye had applied to have the two removed from the proceedings, saying they did the transfer of power from Mr Lungu to Dr Scott after President Michael Sata died during the course of their duty as public officers.
He said that he is the person who Mr Ng’uni should sue and not Dr Scott and Mr Lungu.
Ms Justice Chawatama on December 3, 2014 granted Mr Mwenye’s application and removed Dr Scott and Mr Lungu from the proceedings.
But Mr Ng’uni has filed ex-parte summons asking Ms Justice Chawatama to stay her ruling because he has intentions of appealing to the
Supreme Court.
Mr Ng’uni said this was because he wanted to appeal to the Supreme Court against the removal of Dr Scott and Mr Lungu from the court
proceedings before Ms Justice Chawatama.
Mr Ng’uni is in this mater seeking a reversal of the instruments of power which were transferred from Mr Lungu to Dr Scott after the death Mr Sata on October 28, 2014 in London.