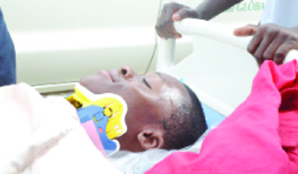 By MOSES CHIMFWEMBE  and SANDRA MWILA –
ZAMBIA Under-17 soccer team player Changwe Kalale, who suffered a spinal injury in the fatal road traffic accident at the weekend, is feared to be paralysed.
Kalale, together with two other Chipolopolo players, Nyambe Mulenga and Satchmo Chakawa, were on Sunday involved in a road traffic accident that claimed four lives in Kabwe.
The accident happened when a Toyota Prado collided with a Zesco United executive bus in Kabwe leaving defender Mulenga and goalkeeper Chakawa together with five Zesco United officials with multiple injuries.
The trio were on their way to Lusaka for the Chipolopolo preliminary preparations ahead of the Equatorial Guinea 2015 Africa Cup of Nations (AFCON) when the incident occurred.
Kalale suffered a spine injury that has shuttered his dream of making an appearance at the 16th edition of the Niger 2015 Africa Junior championship slated for February 15 to March 1.
The promising midfielder was on Monday evacuated to the University Teaching (UTH) in Lusaka from Kabwe General Hospital.
UTH deputy managing director Laston Chikoya said yesterday that the player suffered a spinal injury in the accident.
Dr Chikoya, who conducted a quick examination on Kalale, said the players’ condition was serious although the player was stable.
“He has a spine problem but we can only give further details once we conduct further tests, as you can see he is stable,” he said.
Earlier, Zesco United public relations officer Katebe Chengo said in a statement that Kalale had become paralysed from the waist going downwards.
“Changwe Kalale sustained a spine injury that has left him paralyzed from the waist going downwards, he also sustained a right broken thigh and broken leg. His condition has been described as stable and is admitted to the University teaching Hospital,” Chengo said.
Chakawa, who sustained a ruptured spleen and a bladder, was under observation at Kabwe General Hospital after undergoing an operation on Sunday and is in a stable condition.
She said Mulenga, who is admitted at Lusaka Trust Hospital, underwent surgery on his fractured right leg and was stable and that the Zesco United officials, who suffered various injuries, were also in stable conditions.
Meanwhile, acting President Guy Scott yesterday visited Kalale and Mulenga and pledged Government’s support towards ensuring that the players receive medical attention to enable them recovery quickly.
Dr Scott described Mwiza Ndovi, the Zesco United driver, who died in the fatal accident as a noble man who sacrificed his life in a bid to save the passengers.
“The driver is a noble person and that is what we call brevity. He could have saved his life but he tried to protect his passengers. As government we ensure that the players receive medical attention and also help with the drivers funeral expenses,” he said.
On the other victims, Chengo said Lomuthunzi Mbeba, who sustained fractures on both legs and a fractured right arm, and Frank Chitambala, who sustained broken left leg, had successful surgeries at Lusaka Trust Hospital.
“Peter Mutale, Zesco United Committee Member, sustained a broken left leg and Kunda Kalikiti, Lomuthunzi Mbeba’s son, sustained a broken leg and internal injuries and his condition is and is currently in Kabwe General Hospital awaiting evacuation to Lusaka.
Fusya Bowa sustained soft tissue injuries and general body pains, her condition is stable and will be evacuated from Ndola to Lusaka Trust Hospital,” she said.