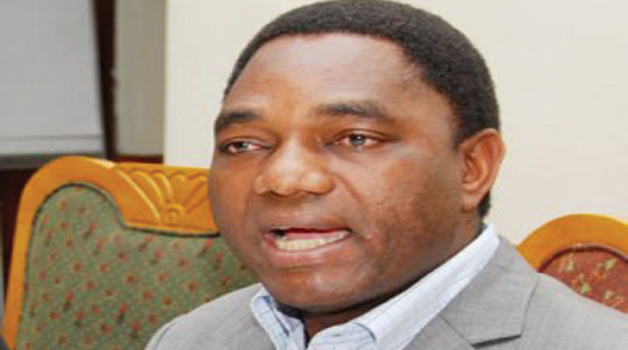 By NAKUBIANA SHABONGO –
UPND leader Hakainde Hichilema has urged the electorate in Mpongwe to reflect on the numerous challenges the district has been facing prior to the presidential election slated for January 20, 2015.
Mr Hichilema said during a campaign rally in Mpongwe that the district had for a long time been gripped with poverty and high levels of poor service delivery due to poor Government policies.
He said farmers had for a long time continued to bear the consequences of expensive farming inputs and late payments for the supply of maize to the Food Reserve Agency (FRA).
The opposition leader urged the electorate in the district not to be cheated in the forthcoming election but instead make a wise choice and vote the UPND into office.
“I am asking you to help me win this election so that you can be better people and have better lives,” Mr Hichilema said.
Meanwhile, the UPND leader has reiterated his party’s commitment to delivering a new constitution.
“Having signed a social contract with the Grand Coalition last month, I am fully committed to delivering a new Constitution if elected president in January 2015. This is now a non-negotiable campaign commitment for us,” Mr Hichilema said.
“The Zambian people were promised a new Constitution in 90 days by the PF. More than 1,000 days later we only have a draft, and a lot of money has been wasted on the process that could have gone to building clinics, hospitals and schools if they had not dragged the process on.”
Mr Hichilema added that if the PF Government had delivered what they promised, there would have been no need for the squabbling and fighting in the ruling PF.
Good governance is essential for economic growth and development which could not be sidelined and it should not be subject to political manipulation by one party or another.
He accused the PF Government of having had a very poor track record not only over the Constitution-making process but also a huge number of ministers and deputy ministers on the payroll, and routine abuse of the Public Order Act.
“What we need now is a united party in Government, willing to work with others regardless of their tribe, gender or background. We need to come together to address these governance issues and much more,” Mr Hichilema said.