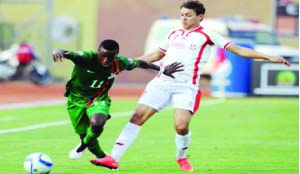 In Ebebiyin
Zambia 1 Tunisia 2
ZAMBIA last night paid the prize for being wasteful as Tunisia romped to a routine win at the 2015 Orange Africa Cup of Nations (AFCON) with coach Honour Janza conceding the Chipolopolo’s route to the quarter-finals is now in jeopardy.
“It’s now difficult for us to make it to the quarter finals because we needed to win this match. It’s painful to lose a game we dominated,” a gutted Janza said after the match.
A relieved Tunisia coach, Georges Leekens said the Carthage Eagles deserved to win the match after being allegedly denied two penalties by Guinean referee Aboubacar Mario Bangoura
Apart from the defeat, Janza was also left with a headache of losing another key member of the squad when Emmanuel Mayuka was rushed to the hospital after injuring himself as he attempted to bury man-of-the-match Rainford Kalaba’s cross in the box.
Midfielder Nathan Sinkala got a knee injury in the opening Group B match against DR Congo which ruled him out of the rest of the AFCON.
Yesterday, Mayuka had given the Chipolopolo the lead on 59 minutes when he blasted home another masterpiece cross from Kalaba.
Three minutes later, Evans Kangwa shot wide with Mayuka lurking at the near-post and then it was AFCON debutant, Lubambo’s chance to fluff his opportunity when he hit the side-netting on 65 minutes.
In an attempt to finish off a Kalaba pass, Mayuka, who was replaced by another AFCON newcomer Jackson Mwanza, ended up injuring himself in the process and had to be stretched out before being rushed to the hospital.
Tunisia then seized the opportunity to level matters through Ahmed Akaichi who tapped in Mohamed Ali Moncer’s cross on 70 minutes as Zambian defenders were ball-watching.
Kangwa had another chance of putting Zambia back in front but his tame shot was easily dealt by the goalkeeper in the 78th minute before Musonda hit the side-netting on 86 minutes after another Kalaba pass.
Two minutes later, Tunisia made the Chipolopolo pay dearly when towering Tunisian captain Yasine Chikhaoui headed home a later winner which broke the Zambian hearts.
Zambia, who remain on a single point from two games, will now have to win the final Group B match against Cape Verde on Monday and hope for favour from the Congo and Tunisia fixture.
In the first half, after soaking up early pressure from the Tunisians, Zambia took control of the game with Kalaba, Musonda and Kangwa running rings round the Carthage Eagles backline.
The Chipolopolo’s first real scoring opportunity came on 11 minutes when Musonda’s delicious cross into the box was scrambled away just as a far as Given Singuluma, whose shot was blocked.
Four minutes later, Kalaba saw his shot after a another good move by Musonda flash just wide with goalkeeper Aymen Mathlouthi at sea.
On the other end, Kennedy Mweene came out fastest to chest the ball away from Carthage Eagles forward, Ahmed Akaichi, who had beaten a Chipolopolo offside trap, on 16 minutes.
Kalaba kept probing the Tunisian backline but again his 26th minute effort went begging before he saw curler punched over the bar by the goalkeeper on 33 minutes.
Despite Guinean referee Aboubacar Mario Bangoura making suspicious decisions against Zambia, the Chipolopolo still dictated the pace and Mayuka was guilty of failing to put away two seemingly easy chances.
Mayuka had a header saved by the Tunisian goalminder on 41 minutes before miscuing a sitter moments later with only Mathlouthi at his mercy.
He, however, made up for the first half mistakes by finishing with aplomb on 59 minutes to give Zambia the lead.
Zambia enjoyed massive support from locals here who even came up with Chipolopolo replica jerseys.
Line-ups:
Zambia – Kennedy Mweene, Davies Nkausu, Emmanuel Mbola, Christopher Munthali, Stoppilla Sunzu, Kondwani Mtonga, Given Singuluma, Lubambo Musonda, Rainford Kalaba, Evans Kangwa (Mukuka Mulenga 87th), Emmanuel Mayuka (Jackson Mwanza 72nd)
Tunisia – Aymen Mathkouthi, Syam Ben Youssef, Aymen Abdennour, Rami Bedoui, Hocine Ragued, Youssef M sakni, Yasine Chikhaoui, Ali Maaloul, Wahbi Khazri (Mohamed Ali Moncer 66th), Ahmed Akaichi (Hamza Younes 79th), Jamel Saihi (Ferjani Sassi 75th).
Referee – Aboubacar Mario Bangoura (Guinea)