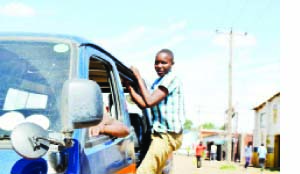 • RUTH shows off her skills at Lumumba Bus station in Lusaka. Picture by CHUSA SICHONE.

By CHRISTINE MWAABA –
THE insatiable appetite to become a driver is what has driven 18-year-old Ruth Shawa to stop school in grade nine to pursue her dream.
Born in 1996 in Kaoma, Western Zambia, Ruth who is popularly known as Muzo says completing school would take longer for her to realize her dream.
So in a quest to realise her dream faster, Ruth opted to become a bus conductor going against the will of her parents who are ready and willing to sponsor her education.
She is currently staying with her parents in Lusaka’s Garden House Township.
“I decided to be a conductor first because conductors learn how to drive fast, so that is why I have taken this route although my parents are against my dream,” she says
From the time, she was young; she enjoyed things that were done by boys and it is for this reason that she has more male friends.
She, however, got inspired by a male friend conductor who used to ask her to shut the bus door each time commuters boarded the bus.
Ruth used to do this when her friend was doing other things she did not want to disclose.
Ruth had taken several trips with the friend who introduced her to the job and she gained experience before becoming a full time conductor.
Thereafter, Ruth found a job as a bus conductor although it is was difficult at the beginning because it was scary and people, especially girls mocked her because of her sex.
She says she had to courageously shift the boundaries set around women to become one of the few women taking up a male dominated job of a bus conductor.
Ruth likes the exposure the challenge has given her.
“Working as a bus conductor is really an exciting and fantastic opportunity for me because I am surrounded by strong willed men who encourage me a lot and tell me that it is a career like any other. It is a job that both men and women can do just like doctors and lawyers. Men and women are the same,” she says.
The nature of her work environment has taught her to think, act and look like a man because of the call boy language and behaviour.
Ruth says keeping her life in check as a girl and living in a man’s world by the nature of her job has taught her that she is capable of doing a man’s job perfectly and brings a different ability and quality to society.
“Sometimes it’s hard for their (men’s) egos to cope with a girl beating them to their job; I can call and convince commuters to use our bus like men do,” she says.
Some men from the bus station she operates from ask why she pursued this career but she confidently and passionately tells them that she is pursuing her dream.
Ruth is aware that the career path she has taken is male dominated and
a strenuous one but challenged society especially men get used to it,
Despite enjoying work as a bus conductor, a day never passes without members of the public teasing her about her male dress code which she prefers to female clothing and the job she is doing.
“I never thought that I would be the one to break the idea of girls or women becoming bus conductors never in my adventurous dreams I guess sometimes you have to be the chosen one.” she says.
Her first route of operation was Mumbwa Road which leads to her area where she received a lot of help from fellow operators.
Lottie Zulu, the bus driver who has been working with Muzo for months now says his experience with Ruth has changed his perception about women and some particular jobs like being conductor.
Lottie says that although at first he was not uncomfortable to work with Ruth because she is a girl, he changed his mind after seeing that she was able to work and deliver to his satisfaction.
“She reports for work on time at 05:00 hours and when we knock off late
she never complains. She will make sure we met our target amount of money we are supposed to give our boss,” he says.
He says although most bus drivers in Zambia work with male conductors, he chose to work with Ruth after realising that he had to support and appreciate the idea of the gender equality.
Ruth has defied odds by breaking the gender barrier by becoming one of the first young female bus conductors in Zambia.