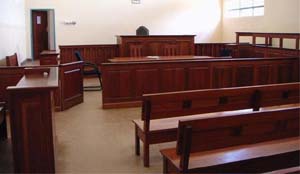 A PANEL of three Supreme Court judges has refused to stay a decision of a single judge who ordered for the repossession of Metro Investment Limited and King Quality Meat Products Limited from other Dar Farms family members, Aristogerasimos and Vasiliko Vangelatos.

Judges Mervin Mwanamwambwa, Munyinda Wanki and Elizabeth Muyovwe, however, ordered that the property in dispute should not be sold until the determination of the appeal.

The panel refused to stay the execution of judgment of a single Supreme Court judgment which further ordered that Aristogerasimos and Vasiliko were not shareholders or directors in the two companies and as such, they had nothing to do with the firms.

This was in a matter in which Aristogerasimos and Vasiliko had appealed to the panel for the varying or reversing of the single judge’s judgment dated May 16, 2012 which discharged an order of stay of execution of the High Court judgment which he had earlier granted.

In 2007, Demetre and three others had applied to the High Court seeking a declaration that his brothers Aristogerasimos and Vasiliko were not shareholders or directors of Metro and King Quality as such they lacked the requisite locus standi to take assets that belonged to the two properties.

Demetre also wanted an order for possession of stand number 29390 in Lusaka and an account of how Aristogerasimos and Vasiliko used all the money collected from the leasing out of flats at the stand.

Additionally, the plaintiffs wanted an order for the removal of caveats lodged by Aristogerasimos on all properties that belonged to the two companies and damages occasioned to Metro as a result of the acts of Aristogerasimos and Vasiliko in interfering with construction works at the stand.

On April 5, 2012 the High Court passed judgment in favour of Demetre and others granting them the relief they were seeking.

But Aristogerasimos and Vasiliko on April 17, 2012 appealed against the judgment and later applied for an order to stay the execution of the judgment pending their appeal but it was dismissed. They were however granted leave to appeal.

However, on April 23, 2012, Aristogerasimos and Vasiliko obtained an ex-parte order of stay of execution of the judgment from a single judge of the Supreme Court but he after an inter-parte hearing it was discharged and the judge refused the stay of execution.

This resulted in Demetre and others repossessing the properties on April 23, 2012, but Aristogerasimos and Vasiliko appealed against the move to a panel of three judges on September 24, 2012.

They asked the panel to vary or reverse the ruling of the single judge on grounds that the judge misdirected himself in his findings.

“We refuse to grant the stay. However, we order that the property in dispute must not be sold until the appeal is disposed of.” Mr Justice Mwanamwambwa said.