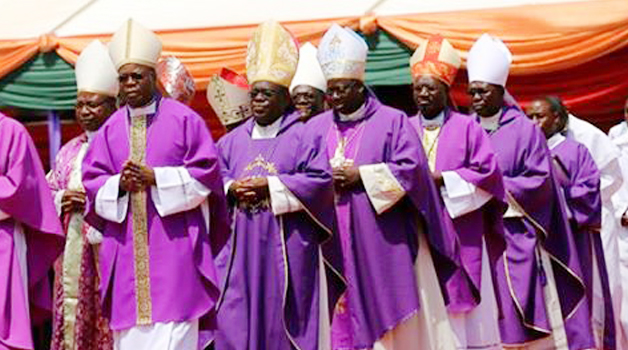 Priest calls for a stop on people peddling lies against the President.

By DELPHINE ZULU-
A CATHOLIC Priest has urged opposition political parties to accept Edgar Lungu as the President of Zambia and stop peddling unfounded lies against him.
Father Steven Mwape of St. Francis Parish in Chawama Township said God had allowed Mr Lungu to be President and that continued false stories about him are not healthy for the nation.
He said President Lungu needed everyone’s support including the opposition to govern the country peacefully as it is not debatable that there can only be one President at a time.
Fr Mwape was speaking yesterday when the Head of State attended mass at the church.
The priest said negative stories about the President are an indication that the opposition has not accepted him as the leader of Zambia and also showed that they are habouring hate against him.
“Do not mind those doubting that you are the President, even in the Bible, we hear of how Thomas doubted, these believe in negative things and always bring confusion, my advice to you is embrace everyone including your enemies, your duty is to bring peace and unity,” he said.
He urged Mr Lungu to ignore those doubting that he is the current President and concentrate on leading the nation peacefully.
Fr Mwape urged the President to look up to God as he leads the nation.
He also asked the President to facilitated developed the lad opposite the church in order to create employment for youths in the constituency.
Mr Lungu, who was accompanied by his wife Esther, Matero Member of Parliament (MP) Miles Sampa and Deputy Minister in the office of the Vice-President Steven Kampyongo, said development is for all Zambians.
He thanked Fr Mwape for his encouraging message especially on those trying to frustrate his vision and that the country can only progress if there is unity and peace in the nation.
“ One Zambia One nation should be respected, it will help to unite everyone, what you said on those peddling lies about me is true, let it be aired so that they hear for themselves, I will remain focused,” Mr Lungu said.