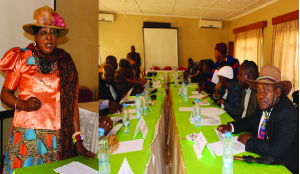 •CHIEFTAINESS Mwenda (left) of Chikankanta gives a presentation to other traditional leaders during a safe motherhood orientation workshop in Choma yesterday. Picture by CHILA NAMAIKO.

CHIEFS in Southern Province have called for more support from Government and the non-governmental organisations (NGOs) to firmly address the rising cases of child marriages in their areas.
The traditional leaders want Government and NGOs to effectively involve them as ambassadors in ending child marriages as well as other related gender-based violence (GBV) cases in their chiefdoms.
Chieftainess Mweenda of Chikankanta bemoaned the rising cases of child marriages in Choma on Monday during a two-day Safe Motherhood orientation workshop organised by Government.
“We represent communities and we have influence to educate our subjects to refrain from marrying off girls, but our efforts require more support from various stakeholders,” she said.
Chief Monze of Monze said people in remote areas needed more sensitisation on where, how and when to report GBV cases, hence the need for chiefs to help in disseminating informative messages.
Chief Chikanta of Kalomo said the majority of traditional leaders had ideas and knowledge to fight GBV cases but many lacked empowerment schemes to reach out to the remote areas.
He said the lack of transport facilities had in most cases hindered them from carrying out affirmative sensitisation mechanisms and he urged Government to help them with mobility.
In her presentation on Mukuni Chiefdom’s programmes in ending child marriage, the chief’s wife, Inankwazi, said the area through its strategic plan, had formed taskforces to address detrimental issues.
She said each taskforce was given a responsibility in addressing a specific issue such as child marriage by continuously sensitising people and those found wanting were reported to police.
She said more than 500 women had so far been screened for breast cancer in Mukuni chiefdom with support from Pick n Pay management.