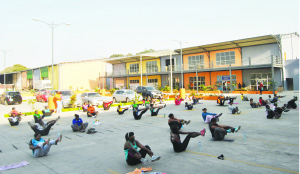 • AN aerobics session at Rekay’s Shopping Mall in Ndola.

THE fitness mania has gripped Ndola, and the men and women who are learning to get a handle on their health by resorting to exercise are all out on the streets.
The new craze for aerobics, jogging and brisk walks is catching on, as a sizeable number of people are seen as early as 05:00 hours on some streets of the provincial capital doing what seems to have become part of their lifestyle.
Others meet at private venues for energy dance-offs, jumping ropes, and high-kicking boxing bags, be it in the morning or in the evening.
The novelty of learning exercising must be exciting for the womenfolk of all ages and body sizes who could now be seen in good numbers either walking or jogging.
For those who can manage to gather at Kafubu Mall, opposite Ndola Golf Course, at 05:00 hours every Monday, Wednesday, and Friday, there is the Ndola Fitness Squad where one could stretch up, do some push-ups and other forms of exercises which are capped by jogging.
Depending on one’s fitness level, the average distance covered by the men and women is seven kilometres.
The distance to be covered is not cast in stone, as beginners could even put in two to three kilometres, according to a squad member.
There are some aerobics sessions taking place at Ndola Swimming Pool, while the car park at Rekay’s Shopping Mall in the central business district is the latest venue for similar work-outs.
The sessions at Rekay’s mall are held every Saturday, from 06:00 hours to 08:00 hours, under the guidance of qualified trainers, courtesy of Fitlink Fitness Centre at Broadway.
The Fitlink gymnasium is another outlet which has attracted many men and women who are passionate about staying fit and healthy.
Many people in Ndola have been non-exercisers for the most part, but they are learning the benefits of exercising, no matter how back-breaking it could be.
As Sophia Breene, the assistant health editor at Greatist Daily writes, people hit the gym or pound the pavement to improve cardiovascular health and to build muscle, but working out has above-the-neck benefits, too.
For the past decade or so, scientists have pondered how exercising could boost brain function.
Regardless of age or fitness level, studies show that making time for exercise provides some serious mental benefits.
One of the most common mental benefits of exercise is stress relief. Working up a sweat can help manage physical and mental stress.
Exercise also increases concentrations of norepinephrine, a chemical that can moderate the brain’s response to stress.
Studies have shown that exercise can even alleviate symptoms among the clinically depressed.
In some cases, it can be just as effective as antidepressant pills in treating depression.
On a very basic level, physical fitness can boost self-esteem and improve one’s self-image.
Regardless of weight, size, gender, or age, exercise can quickly elevate a person’s perception of his or her attractiveness, or self-worth.
It is evident from the passion many people in Ndola are beginning to show in exercise that they have learnt the numerous benefits which include the prevention of cognitive decline.
There is, therefore, no excuse for those seeking to alleviate anxiety, to boost brainpower, to sharpen memory, to increase relaxation, to tap into creativity, or simply to inspire others because Ndola now has the right platforms for regular exercising.