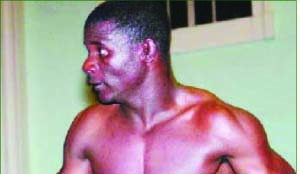 ORIENTAL Quarries Boxing Promotions (OQBP) manager Chris Malunga said his stable will push for Charles Manyuchi to fight World Boxing Council (WBC) silver welterweight champion, Amir Khan.
Chris Malunga said he will be travelling to China in November to begin the process for the bid to fight Khan.
“I am happy Manyuchi is in the Green belt, the same category of Floyd Mayweather and I will be going to China in November to bid for him to fight Khan. Manyuchi is not only raising the Zambian flag high but putting the entire continent on the map,” he said.
Manyuchi, the WBC International champion, said he was now ready to face any boxer in the world.
He said this yesterday upon arrival from Italy at the Kenneth Kaunda International Airport (KKIA) were he successfully defended his title against Italian champion Gianluca Frezza.
Manyuchi delivered a sublime showing, in his toughest fight away in Italy to embarrass the Italian, who was psyched for the bacout by taking it to Sequals, the town from where Italy’s greatest boxer, the legendary Primo Carnera, was born.
“I successfully defended my title and I am now ready to fight any boxer in the World. I fought a good boxer, Frezza is a good boxer and well respected in his country but for me I don’t respect him,” he said.
Manyuchi said he had no challenges fighting away from home as he considers every country his home.
Meanwhile, on whether Manyuchi was considering the offer of accepting the honourary citizenship being offered by the Zambian government, Malunga said it is a critical matter that should be handled carefully to avoid problems between the two countries.
“When we signed Manyuchi, we wanted to add value and competition to the stable. Not only does he represent Zambia and Zimbabwe but the entire Africa. We shall handle this matter of citizenship carefully as you know he is Zimbabwean and we don’t want to have problems with his country,” he said.
Manyuchi in December, 2012 turned down the offer by then Sports Minister Chishimba Kambwili to get an honorary Zambian citizenship.
“I was offered citizenship though I could not accept due to the fact that I am Zimbabwean and I would not want to change that because I love my country,” Manyuchi told the Herald newspaper when he went on holiday after defeating Colombian Deivis Casseres.