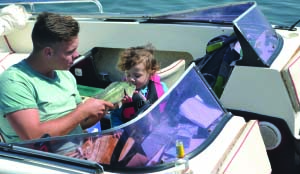 •BRANDON Reed with his niece at Mindolo Dam during the fishing competition in Kitwe recently.

MINDOLO Dam in Kitwe has over the years been associated with different kinds of entertainment which help families relax after their various undertakings.
But, now, fishing is proving to be a crowd puller, and is providing a platform for good competitions.
Fishing and other water-based adventures are always exciting, more so that many rivers and dams in Zambia contain good stocks of fish.
Mindolo Dam is one such water body where lovers of fishing would find a good time to relax.
Last weekend, the US$1,000 top prize for the fishing competition held at Mindolo went begging as none of the 22 competing groups managed to catch one of the two-tagged fish.
In order to win, the groups were tasked with the challenge of hunting for one of the two-tagged fish placed in the dam when the competition was last held a month ago.
When the competition resumed, the groups in their respective boats dashed for the big hunt of the fish, which unfortunately proved elusive.
There were, however, some consolation prizes for grabs that included the most fish caught.
This was scooped by the Bushcat, with 16 fish caught, followed by PC that had a catch of 14 fish. Champ came third with a catch of 13 fish.
Another category involved the ‘Biggest Fish’ caught, and was won by Andy Fisher, who managed to catch a fish weighing 1.08 kilogrammes and was closely followed by Allan Champion, with a 0.98 kilogramme fish.
Lionnet Nicholas, the chief commodore for Mindolo Dam, thanked Ox Hydraulics and Anelea Machines for sponsoring the competition, whose total sponsorship package was $2,000.