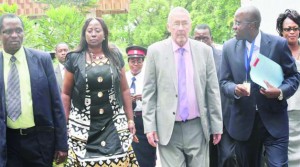 HIGH bank interest rates in the country are preventing many Zambians from acquiring mortgages to build houses, Vice-President Guy Scott has said.

He said in Lusaka yesterday that interest rates on borrowing in the region were high but that they were worse in Zambia where people found it hard to invest in the housing sector.

“It is hardly surprising that we are short of 1.3 million housing units in Zambia,” he said.
He said it was sad that most Zambians, including some top Government officials he worked with, were renting houses.

Dr Scott said Zambians had been subjected to high rentals and high mortgages, but that the Government was determined to change the situation.

He urged the Ministry of Local Government and Housing to work with his office to help sort out the housing problem in the country.

Dr Scott said public private partnerships (PPPs) would also go a long way in addressing the housing situation.
He, however, said the PPPs were also being affected by the fact that most Zambians had no ability to invest in the economy.

“Let us all work together in addressing the problem of urban housing. As Government, if we can help, we want to help,” he said.

Ms Kabanshi explained that the high levels of urbanisation had continued to be a challenge in achieving sustainable human settlements.

AMCHUD head of permanent secretariat Thomas Ogutu said regional African countries should work together to improve the lives of people in slums.

“Africa is at crossroads and by 2050, most cities will double their population, so it is important for us to start preparing now,” she said.