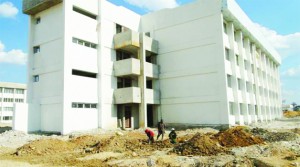 •GOVERNMENT will this year accelerate construction of education infrastructure in the country. Above Robert Kapasa Makasa University in Chinsali under construction. Picture courtesy of STATE HOUSE

GOVERNMENT will this year accelerate the construction of education infrastructure and continue to establish new universities in all the provinces, President Michael Sata has said.

Mr Sata said the construction of universities was a major achievement for the country.

Speaking on his Facebook page yesterday, Mr Sata said under phase one, a total sum of K320.2 million had been allocated for the activity.

“Let me emphasise to you dear friends, the construction of the universities is a major achievement for our country which, once completed, will broaden opportunities of access to university education and help decongest our two public universities.

“It should be noted that our Government’s aim is to build a university in each province,” he said.

He said the construction of Robert Kapasa Makasa University for Science and Technology in Chinsali had entered phase two and would continue.

Livestock Sciences, which started last year, would also continue, while the construction of phase one of Paul Mushindo University had also started.

Further, the procurement process to engage contractors to design and build King Lewanika University at Namushakende in Western Province and Luapula University in Mansa had begun.

He said it was also worth noting that in the allocation to the Ministry of Education’s infrastructure budget of K404.3 million for university and other tertiary infrastructure was K250 million to kick-start the construction of student hostels at the University of Zambia and Copperbelt University.

On teacher recruitment and deployment of 4, 500 teachers in 2013, Mr Sata said 500 were on the Copperbelt, another 500 in Lusaka, 459 in Southern Province while Northern Province had 437 teachers.