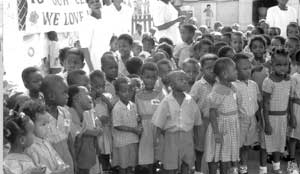 •Government recently introduced a policy that children from pre-school to Grade four be taught in the local languages.