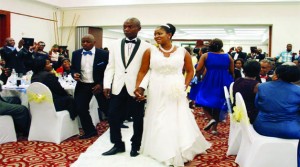 ACTING President Alexander Chikwanda has called on married couples to remain faithful to one another and ensure God remains the pillar of their matrimony.
Mr Chikwanda said love should be cherished as the most important ingredient in a marriage.

He was speaking at a colourful wedding ceremony of President Michael Sata’s son Kazimu, who married Tiwonge Mukobeko.

The ceremony was held at Pamodzi Hotel in Lusaka on Saturday evening.
Mr Chikwanda advised the newly-weds that the main ingredient of a happy marriage was love for each other and God as the anchor.

“I am pleased to welcome you to the holy matrimony. The ingredient of a marriage is to love your spouse and remain faithful to each other,” Mr Chikwanda said.

He urged the couple to ensure they welcomed members of both families and live in harmony.

He advised them to consult each other and involve God in everything they engaged in.