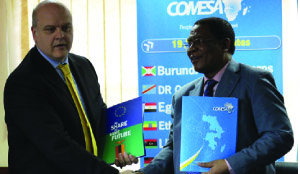 •Head of the European delegation to Zambia Ambassador Alessandro Mariani (left) exchange a copy of the agreement with the Common Market for Eastern and Southern Africa (COMESA) secretary general Sindiso Ngwenya. Picture  courtesy of European Union

THE European Union (EU)  has signed a 4.485 million euros technical corporation facility to support the implementation of regional integration programmes in the Eastern, Southern Africa and India Ocean (EA-SA-IO) region.
The agreement was signed by the head of the European delegation to Zambia and special representative to the Common Market for Eastern and Southern Africa (COMESA) Alessandro Mariani and COMESA secretary general Sindiso Ngwenya in Lusaka yesterday.
The funds will be shared between five regional economic communities namely, COMESA, Southern Africa Development Community (SADC), East African Community (EAC), Inter-Governmental Authority on Development (IGAD) and the India Ocean Commission (IOC).
Mr Mariani said the 4.485 million euro (approximately K54 million) would support the technical corporation facility for the COMESA region.
“This project aims at facilitating the effective implementation of the EA-SA-IO regional indicative programmes which will run up to 2020,” Mr Mariani said.
Under the 11th European Development Fund regional indicative programme the European Union has committed a total of 1.13 billion euros for the period 2014-2020 to support the EA-SA-IO region and their member states in their efforts to further develop regional economic integration, maintain peace, security and regional stability and preserve natural resources in the region.
Mr Mariani said the technical cooperation facility would be instrumental in supporting the design of regional programmes to be funded by the European Union in EA-SA-IO region.
“Amongst others it will provide technical support studies, sector surveys, stakeholder’s consultations, communication and monitoring activities in various development areas such as trade integration, migration, maritime security and wildlife conservation,” he said.
Mr Ngwenya commended the European Union for its continued support to economic integration of the EA-SA-IO region and in particular the COMESA sub-region.
“It is not an understanding that without the support of the European Union the achievements made by COMESA in regional integration would have been less than optimal.”
“COMESA already has a framework to ensure that we deliver time bound results and demonstrate value for money for this facility,” Mr Ngwenya said.
He explained that out of 1.3 billion euros, 600 euros would be used for blending and leveraging of funds to enable implementation of regional infrastructure projects, 205 million euros would be used for selected cross-regional actions and 450 million euros are for the specific envelopes of COMESA, EAC, IGAD, IOC and SADC.
Mr Ngwenya said COMESA was expected to receive 85 million euros from the funds.