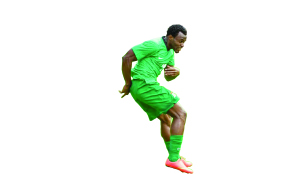 • Kalengo has taken the Congo
Brazzaville league by storm

By Ndinawe Simpelwe –
ZAMBIA today gets their biggest test of Group E in the quest to qualify to the 2017 Africa Cup when they face their main rivals in the group, Congo Brazzaville at the new Kintele Stadium.
Four days ago, Chipolopolo gave away a 1-0 lead back home to draw 1-1 and complicate their chances as they head into tonight’s match in a hostile environment.
To compound Zambia’s challenges, is the absence of defender Stopilla Sunzu from the team after the lanky defender accumulated two yellow cards in this qualifying campaign and is suspended for this must-win match tonight.
Congo and Zambia share top spot on five points apiece but tonight’s hosts boast of a superior goal aggregate after three matches played.
The complexity of today’s match has been put in the spotlight by Guinea Bissau who stand a point adrift and can climb to the top if they beat Kenya and Zambia’s tie ends in a draw.
Guinea Bissau stunned Kenya on Wednesday with a 1-0 home win to move to four points and a win today away to Kenya would see the group’s minnows move to seven point to occupy either top or second position.
Chipolopolo coach George Lwandamina knows how crucial the match is and will settle for nothing less than a victory.
Lwandamina said after the first leg that he was happy with the team’s performance despite giving away the lead.
He said the way the team played as a unit was encouraging despite not having enough time to train together.
On the other hand, Congo Brazzaville coach Pierre Lechantre heaped praise on Collins Mbesuma saying the striker can be deceiving looking at his body.
Lwandamina will again bank on Winston Kalengo who has taken the Congo Brazzaville league by storm since joining AC Leopards and the striker was on target in the first leg at Levy Mwanawasa Stadium.
The Congolese, however, know too well the threat Kalengo poses and are expected to  mark him tightly hence the responsibility will fall to Mbesuma whose hat-trick the last time Zambia visited Brazzaville earned Chipolopolo a 3-2 win in the World Cup qualifiers back in 2004.
Lwandamina is expected to recall Buchizya Mfune in the absence of Sunzu to partner Adrian Chama in central defence while Davies Nkausu and Stephen Kabamba will man the wing backs.
Captain Rainford Kalaba will lead from the midfield together with Nathan Sinkala and should need arise, the experienced Isaac Chansa is available while Christopher Katongo might be more effective on the wings as compared to the central midfield role he was given in Ndola.
Mbesuma once more will be employed just behind Kalengo as the two will lead Zambia’s attack.
Congo Brazzaville were disciplined tactically and deserved a point in Zambia but tonight they are expected to be more offensive which will be what Lwandamina and his charges will want as this will create spaces for the Chipolopolo to explore.