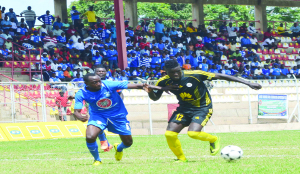 By SAMUEL LUKHANDA at Nkana Stadium –
Nkana 3 Eagles 1
FEROCIOUS striker Walter Bwalya yesterday scored a brace as Nkana produced an outstanding comeback to record a convincing victory over Green Eagles and hold firm to their grip at the summit of the table.
This MTN/FAZ Super League Week two encounter played before a partisan crowd was not short of drama as Nkana assistant coach Zeddy Saileti was given marching orders for harassing the fourth official.
The visitors were on the onslaught from the start whistle with defender Cosmas Bulaya grabbing a lead in the first minute after capitalising on goalkeeper Scott Ngokene’s error to poke home with superb precision from close range.
Bulaya profited from Ngokene’s failure to deal with the ball early on to put his side in the driving seat as the home fans were left stunned.   Sensing danger, the 12-time Zambia champions stepped up their game and got rewarded in the 27th minute when Walter restored parity with a clinical finish off a Simon Bwalya cross.
With the match heading for halftime, Walter turned provider for Bwalya, who powered home a second goal to set Nkana stadium alight as the home team went into the break with a 2-1 lead.
Walter completed his brace after restart when he curled in a beautiful strike from outside the box to make it 3-1 and extend his side’s winning streak to two games. Eagles would have reduced the deficit but missed a penalty in added time as their search for the first points this season continues.
Nkana now lead the charge with six points, two ahead of their rivals Mufulira Wanderers.
Wanderers 2 Nkwazi 1
‘Mighty’ Mufulira Wanderers managed to get a win under their belt but it was a hard fought victory against a stubborn Nkwazi team, reports ALBERT KAMUSWEKE from Shinde Stadium.
In their first home match this year, Wanderers gave the fans a dream start by netting twice in the opening 17 minutes to unsettle the resilient Lusaka side with the first goal coming in the eighth minute through Mike Katiba after Nkwazi goalkeeper Charles Mushanga spilled a shot into his path.
Austin Banda then tapped in off a Joseph Sitali low cross before the 17th minute to double the lead before Nkwazi scored a consolation goal though Edward Mwamba in the 32nd minute after a pass from Aaron Mulambya.
Rangers 2 Power 1
Bruce Mwape made a bright start as Nchanga Rangers coach when his side beat bitter rivals Power Dynamos in a match that saw a minute of silence observed just before kickoff in honour of late club coach Fighton Simukonda who died on February 15 after battling with diabetes, KALUMIANA KALUMINA reports.
All three goals came in the first half with Nchanga taking the lead with just 45 seconds played through Bwalya Kasonde before Chongo Chirwa extended the lead in the 28th minute after slipping passed Francis Kasonde and beating goalkeeper Joshua Titima.
Power cut Nchanga’s lead in the 39th minute through Julius Situmbeko who hammered in an unstoppable volley to beat goalkeeper Pascal Kasonde.
Lumwana 1 Arrows 1
Lumwana Radiants’ first taste of premier league football ended in a draw at home to Red Arrows that saw Bruce Musakanya score before limping off with an injury while his fellow defender Benedict Chepeshi was sent off in the 47th minute for two bookable offences.
Arrows took the lead in the 18th minute through Musakanya who nodded home after Radiant’s defence failed to clear the ball from danger but the home side replied through second half substitute Lembani Lungu, who drew level to earn his team a point.
Zanaco 2 Tigers 1
Sandra MWILA reports from Sunset stadium that six-time champions Zanaco kicked off their league quest with a deserved win over newcomers Lusaka Tigers.
After a scoreless first half which was restricted to long range efforts, Zanaco came into the second breathing fire and saw Augustine Mulenga head high from close range in the 68th minute before first half substitute Potipher Zulu made the dominance count with a 74th minute strike off a Charles Zulu cross.
Mulenga later atoned for his earlier miss by confirming the points with an 87th minute goal that took Zanaco to three points, same as Tigers who won last week at home.
Dynamos 0 Warriors 0
In a lunchtime kick off at the same venue, Kabwe Warriors had a frustrating return to the elite league after posting a scoreless draw that was characterised by a myriad of wasted scoring opportunities.
Warriors forward Paul Simpemba was guilty for two gilt-edge occasions wasted opportunities with the first on 44 minutes when he found himself with only goalkepper Edward Mwanza to beat but saw his effort saved and went on miss another chance in the 50th minute off a Claude Bwalya pass which hit the cross-bar.
In Mazabuka, Nakambala Leopards played out to a barren draw at home to Forest Rangers, JIM FIKOLOMA reports from Nakambala stadium.
With Nakambala getting their season underway with a draw, Forest Rangers remained undefeated in this campaign but also have no win and neither have they scored.