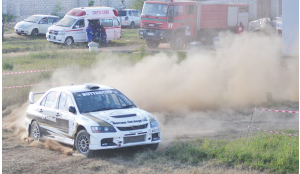 • Rally driver Leeroy Gomes negotiates a curve during the qualifying stage of the second round National Rally at Twin Palm Mall in Lusaka.
Picture by GWEN CHIPASULA

NDOLA-BASED driver Leeroy Gomes will hold pole position in today’s Alliance Motors Barn National Rally after winning yesterday’s qualifying stage following a breathtaking performance at Salama Park’s Twin Palm Shopping Mall in Lusaka.
Gomes, who was racing in a powerful Mitsubishi Evo, timed two minutes 32 seconds while Muna Singh Senior, winner of the first round national rally and who everyone wanted to see was downgraded to fourth position after clocking two minutes 40 seconds.
In second place was Muna’s son Muna Singh Junior who clocked two minutes 36 seconds finishing just ahead of Farouk Ticklay who managed two minutes 38 seconds to find himself in third place.
And another Ndola-based driver, Chibulu Kapala was just a second behind Muna Singh Senior after timing two minutes 41 seconds, while Kelvin Mhlanga could not finish the race after his car developed a fault with a failed pump.
Meanwhile, Muna Singh Senior has promised to put up a tough performance today at Barn Motel with all the 27 drivers taking part.
Muna said in an interview after yesterday’s qualifying stage that the race served as a good preparation for today’s competition.
The veteran driver, who won the first round of the Zambia Motor Sports Association (ZMSA) rally a month ago, said he will not go down without a fight despite coming out fourth in the qualifying stage.
“We shall see how tough the competition will be tomorrow (today). But one thing I know is that I will not go down without a fight because the aim is winning this one again or if it reaches its worst, I should finish in top three,” he said.
The drivers will today be racing on a total distance of 189.28 kilometre at Ban Motel, with three stages to go through.