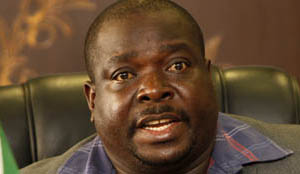 THE Government has unearthed a scandal involving milling companies that are taking mealie-meal straight to Kasumbalesa border in Chililabombwe and stocking the commodity in their warehouses.
The mealie meal is later smuggled into the Democratic Republic of Congo (DRC) were it is fetching around US$14 (K140.00) per bag.
This has caused the shortage of mealie meal in major towns around the Copperbelt.
Chief Government spokesperson Chishimba Kambwili said the shortage of mealie meal in towns such as Chililabombwe, Chingola, Kitwe and others, was a result of milling companies opting to deliver the commodity to Kasumbalesa where almost all of them had warehouses.
Mr Kambwili who yesterday together with officers from the Zambia National service (ZNS) conducted an undercover mission around Kasumbalesa from 01:30 hours to 04:30 hours, was dismayed at the high levels of smuggling.
Mr Kambwili who is also Information and Broadcasting Services Minister had difficulties to comprehend when he found almost all the milling companies had warehouses fully stocked with mealie-meal within the border post premises.
As if that was not enough, the border post premises was also characterised by a number of other private warehouses, which were equally fully stocked with mealie meal.
“I think going forward, we have to either regulate the amount of mealie meal going to Kasumbalesa border or completely ban the export of the commodity,” Mr Kambwili said.
Meanwhile a Taskforce comprising officials from the ministries of Home Affairs and Agriculture has been formed to establish the owners of several trucks impounded on suspicion of being used to smuggle mealie meal and maize bags.
Recently, a number of trucks laden with mealie meal en route to neighbouring countries were impounded, a situation that led to the Government to impose a ban on exports to facilitate a physical verification of maize quantities in the country.
Police deputy spokesperson Rae Hamoonga said in an interview yesterday that the aim of the Taskforce was to establish the owners of the trucks and verify if they had valid maize and mealie meal export permits.
Mr Hamoonga said police officers were alert and would ensure that they arrest anyone found wanting during the maize and mealie meal export ban period.
He said the owners of the trucks who would not be found with genuine maize export permits would face the law.
“There is a Taskforce that has been formed comprising officials from the Ministry of Home Affairs and the Ministry of Agriculture.  As it is now, the impounded trucks are being scrutinised to ascertain the owners and also establish the validity of the maize export permits. If they are found with stolen or fake permits they will face the law,” Mr Hamoonga said.
Mr Hamoonga said police would not take lightly people who willfully abrogated the law.
Meanwhile another truck carrying over 100 bags of mealie meal has been impounded in Ndola by alert members of the public.
And a milling company, Chimanga Changa, has blacklisted two retailers for selling mealie-meal above the stipulated price of K75.
Both Copperbelt Police Commissioner Charity Katanga and Copperbelt PF security wing chairperson Albert Kapakala confirmed the confiscation of the mealie meal destined for Democratic Republic of Congo (DRC).
Ms Katanga said the Mitsubishi Canter registration number BCA 904 was found with 157 bags of mealie meal destined for Sakanya boarder en route to DRC.
Meanwhile Chimanga Changa spokesperson Ozwell Nyoni said the two retailers have been blacklisted from purchasing the commodity from Chimanga Changa after it was discovered that they were abrogating the company’s directive.
Mr Nyoni named the two retailers as AK Groceries of Twapia and Tusekelele of Old Mushili.